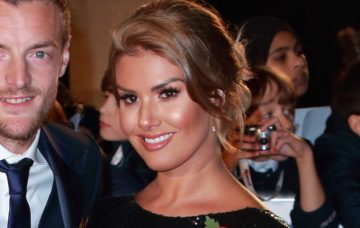 It's a pretty good resolution, to be fair!

Becky Vardy has taken inspiration from the jungle when it comes to her New Year resolution.

The 35-year-old wife of footballer Jamie Vardy has admitted in a new interview she doesn’t usually make resolutions as she just breaks them within a week (don’t we all!)

But after her experience on I’m A Celebrity… Get Me Out Of Here!, there is one thing she DOES want to change in 2018.

Read more: EastEnders REVEALED: all the huge storylines for 2018 exposed

She explained to Now magazine: “This year, after watching back my miserable face on I’m A Celeb, I am going to try to be a bit happier.

“The first place I’ll start is by losing the ‘resting [bleep] face’ I have!

“I need to shake off the Mardy Vardy nickname.”

Becky was the third celebrity to leave the jungle this year, after making a name for herself thanks to her ‘moody’ facial expressions and no nonsense attitude towards Bushtucker Trials.

Speaking to The Sun afterwards, she fully admitted to having a “resting [bleep] face” and said footballer husband Jamie finds it “hilarious”.

She said: “I just can’t hide my emotions!”

And speaking of Jamie, Becky revealed her other resolution is to spend more time with her family.

The WAG told Now mag that while she and Jamie do go out on date nights and meet up with pals, she’d like them to make spending time together a priority in 2018.

“We spend quality time with each other at home, but I think we need to prioritise that,” she said.

“All couples need to remember to just chill out in the evenings with a pizza and a bottle of wine.