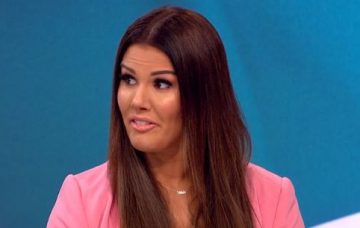 Becky Vardy gets an apology from Loose Women’s Saira Khan

We didn't see that coming!

Saira Khan apologised to Becky Vardy for misjudging her on Thursday’s episode of Loose Women.

The panellist kicked off the show by telling Becky she was sorry for comments she’d made about the WAG on Twitter while watching I’m A Celebrity… Get Me Out Of Here!

It was Jane Moore who brought it up, saying: “Can we sort this out because the last thing I heard about you two…”

Saira finished the sentence: “It was a bit of a spat…”

Turning to Becky, she said: “So, basically, Rebekah, you were on I’m A Celebrity, the jungle, and I put on Twitter, ‘Oh, I’m not sure, she’s a bit of a hard one’ and I’d like to apologise because you’re a gorgeous, lovely woman.

“I should not be doing what you do on social media and judging people before you meet them.

“So I apologise. I think you’re lovely.”

Becky, who is married to England footballer Jamie Vardy, said she accepted Saira’s apology and the two women hugged.

The mum of four was a contestant on the 2017 series of I’m A Celeb, where she was the third campmate to be eliminated.

She had a tough time when she left camp, emerging from the jungle to discover she’d been accused of ‘bullying’ fellow campmate Iain Lee alongside Dennis Wise, Jamie Lomas and Amir Khan.

The star previously told Loose Women: “It was the most horrific experience, coming out and being told what had been portrayed in the media and social media.

“Iain and I had so many deep conversations and we’ve since spoken since we both came out and there are no hard feelings between us.

“There was no bullying.”

Have you ever misjudged someone on social media? Leave us a comment on our Facebook page @EntertainmentDailyFix and let us know!