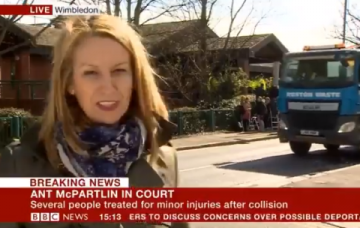 The prang was caught on camera as BBC reporter Alison Freeman presented live from the front of the courthouse in south west London.

Behind her, a car bumped into another which was stationary in front, which then proceeded to crash into a van.

A car accident outside court as media wait for Ant McPartlin. Live on BBC News. You couldn’t make it up! pic.twitter.com/Xodu82XDC6

Shocked, Alison said: “Excuse me, oh, just some cars had a bit of a crash behind us there… Such is the media crowd, it has been very busy here today.” 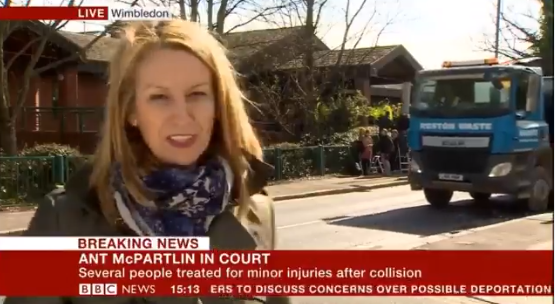 Her colleague in studio can be heard saying: “Oh dear.”

Alison was part of the media circus waiting for Ant to deliver a statement after his hearing, in which he pleaded guilty to driving with 75 microgrammes of alcohol in 100 millilitres of breath. (The legal limit is 35 microgrammes.)

The presenter was charged with drink-driving, following an incident in Richmond on the afternoon of March 18.

District Judge Barbara Barnes ordered him to pay an £86,000 fine, and suspended him to a 20-month driving ban, which could be shortened to 15 months on completion of an awareness course.

The ITV presenter said outside court: “Can I say a few words? I just want to say I’m truly sorry for what happened. Higher standards are expected of me, I expect them of myself.

“I let myself down, I let a lot of people down. I am truly sorry.

Earlier, the court heard that Ant told police after the crash: “I am very sorry I did this. I am ashamed and mortified that this happened.