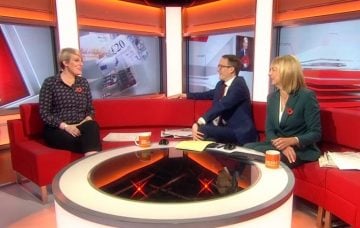 Thankfully, Steph McGovern was not hurt

BBC Breakfast viewers were left chuckling on Monday after the show aired an unfortunate blooper.

Financial and business journalist Steph McGovern explained how she’d been filming a segment on today’s Budget 2018 in Sheffield with a large door prop when the weather caused havoc!

Louise Minchin quipped: “Did you lose the door?”

Steph, who was in the studio, explained: “I took out this door prop as I wanted a way to transition between different shots and obviously Sheffield is the home of Doctor Who at the minute and the Tardis and all that jazz.

“It was windy, the door was very heavy and as a result this happened.”

A pre-recorded clip was then aired – and later posted to social media – which showed Steph stepping out of the door and beginning to walk away.

But a gust of wind then caught the door, which began to roll down the hill before crashing to the ground as Steph ran after it.

A laughing Steph called to the cameraman: “Have you got that on camera?”

Back in the studio she said: “It just missed my feet!”

Louise joked: “Did you read the health and safety form?”

You know what they say: when one door closes, another one opens…or in this case rolls away, blows over and shocks a farm of goats and Shetland ponies 🙈 This is the VERY LAST time we trust @stephbreakfast with a special @BBCBreakfast prop! 💥🚪🐎🐑💥 #Budget2018 pic.twitter.com/Sxct9hIeSY

Steph answered: “The risk assessments were all filled out, don’t worry! What you couldn’t see on shot, just out of the shot, was our hire van. The door was heading for the van!”

Viewers found the blunder hilarious and took to Twitter to share their amusement and tell Steph they were glad she was okay.

The programme had been interviewing Monty Python icon Eric about his new book when eagle-eyed viewers noticed a picture of Steve had been used on the studio screen behind him. Oops!

The mistake likely came as Steve once played Eric in the 2011 BBC adaptation of Holy Flying Circus in 2011.

Eric retweeted one message from a viewer who had spotted the mistake which suggests he realised it too but was perhaps too polite to say anything!

Did you find this moment funny on BBC Breakfast? Leave us a comment on our Facebook page @EntertainmentDailyFix and let us know what you think!