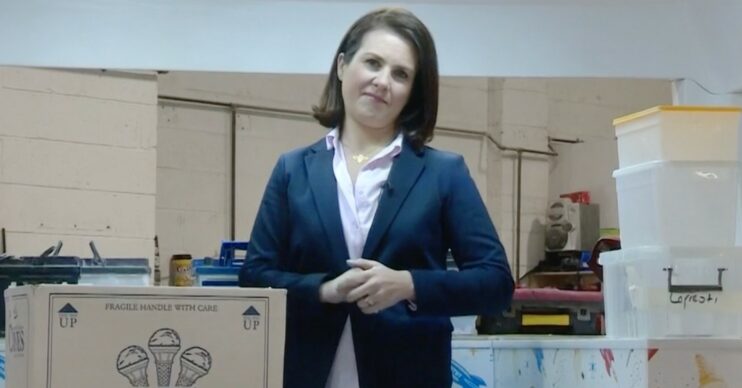 The 41-year-old presenter shared side by side photos with her Instagram followers, and it’s safe to say they were impressed!

BBC Breakfast presenter Nina uploaded two pictures to her Instagram. In the picture on the right, the presenter – who was pregnant at the time – can be seen wearing a big pale blue coat and yellow hairnet.

She is standing with her hand on her hips, smiling at the camera during a trip to a factory.

Read more: Nikki Grahame’s heartbreaking admission before her death: ‘She just couldn’t do it’

The picture on the right shows Nina in the same pose, minus the hairnet and the coat, looking noticeably slimmer – and without a baby bump this time.

Nina added: “One thing is consistent – men I’ve never met will highlight the fluctuation, and offer me feedback.

“Cheers fellas. It’s VERY important to me and I take it VERY seriously.”

Plenty of Nina’s followers on Twitter decided to play along with the presenter in wondering what was different about the two snaps.

“My wife tries to trip me up with this – you’ve had a haircut?” one asked.

“Hmm, microphone? Red wellies? No – you’ve got me on this one. They’re both of you, that’s the main thing!” another said.

“Took me a while…. it is the nail varnish.. nice colour,” a third wrote.

Others took to the comments to compliment the presenter.

“You look stunning in both,” one of her followers said.

“You look fantastic in BOTH pictures @NinaWarhurst,” another wrote.

Earlier this week it was announced that Dan Walker would be leaving BBC Breakfast after six years of fronting the show.

The 44-year-old is set to begin his new role on Channel 5 in the next few weeks.

Upon hearing the news, Nina was one of many who reacted to it online on Monday (April 4).

Read more: The Split fans rage at BBC over infuriating spoiler at the end of episode 1

Nina posted a gif of a little girl holding back tears on her Twitter, writing: “Ohhhhhhhh I’ve loved working with @mrdanwalker.”

She continued saying: “& I loved working @5_News, so I wish them well & hope they’ll be very happy together ok so stop asking.”

She then posted a number of crying emojis at the end of her tweet.

“It’s been an absolute pleasure working with you too Nina. See you in the morning,” Dan said in response to her tweet.