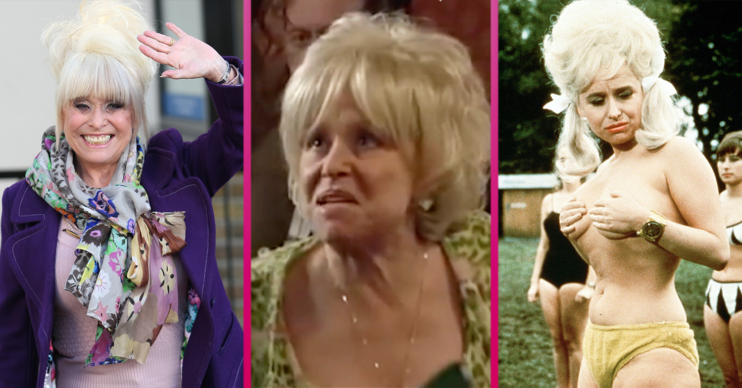 Barbara Windsor death: What were her most famous film and TV roles?

She was so much more than an EastEnders landlady

Following the death of Barbara Windsor, tributes for the actress have poured in.

Famous friends and fans alike have been remembering the iconic actress, who is perhaps best known for her role as Peggy Mitchell in EastEnders.

However, playing the iconic Queen Vic landlady came later in life for Barbara.

So what was she most famous for before that?

When did Barbara Windsor get her big break?

Barbara showed a love for the theatre at an early age and made her West End debut at the age of just 15.

She appeared in the chorus of musical Love From Judy in 1952, taking the stage name Windsor in 1953 after being inspired by the coronation of Queen Elizabeth II.

Barbara then set her sights on the world of film, appearing in 1954 film The Belles Of St Trinian’s.

She was just 17 years old at the time.

It was the Carry On films that made Dame Barbara a household name.

She was so much more than a great pub landlady and Carry On star.

She starred in nine of them, her first being Carry On Spying in 1964.

It was perhaps her role in 1969’s Carry On Camping that gave her the most exposure, though – quite literally.

In one of her most famous scenes, a young Barbara is seen taking part in an outdoor exercise class led by Sid James.

After a particularly vigorous exercise, Barbara’s bright yellow bikini top flies off – but in true Carry On style exposure is implied and little is seen.

Her last Carry On film, Carry On Dick, was released in 1974.

She also starred on Broadway and toured the UK, New Zealand and South Africa with her own show, Carry On Barbara!.

Michael Aspel surprised her with a This Is Your Life tribute in 1992.

But her most career-defining role was still to come.

When did Barbara join EastEnders?

It was her arrival in Albert Square in 1994 that truly cemented Barbara’s status as a national treasure.

Peggy won the actress a Best Actress Award at the 1999 British Soap Awards, before she was honoured with a Lifetime Achievement Award in 2009.

Her last appearance in the soap took place in 2016, when the character took her own life.

After leaving and returning to the soap many times over the years, Barbara said that if Peggy had remained alive, she would’ve always been drawn back to playing her.

What else did Barbara do?

The actress kept herself busy in between breaks from EastEnders.

She voiced Dormouse in Tim Burton’s Alice In Wonderland in 2010.

She also appeared in pantomime.

Barbara made a camera appearance too in 2017’s BBC television film about her career, Babs.

What did Barbara do after her Alzheimer’s diagnosis?

After she was diagnosed with dementia in 2014, Barbara worked to raise awareness of the disease.

On her 82nd birthday she became an ambassador for the Alzheimer’s Society and appeared in a video for the charity.

She passed away at her London care home after a long and illustrious career at the age of 83 on Thursday (December 10).

He said: “So sad about Barbara Windsor, so much more than a great pub landlady and Carry On star.

“She campaigned for the lonely and the vulnerable – and cheered the world up with her own British brand of harmless sauciness and innocent scandal.

“Thoughts with Scott and all her family and friends.”