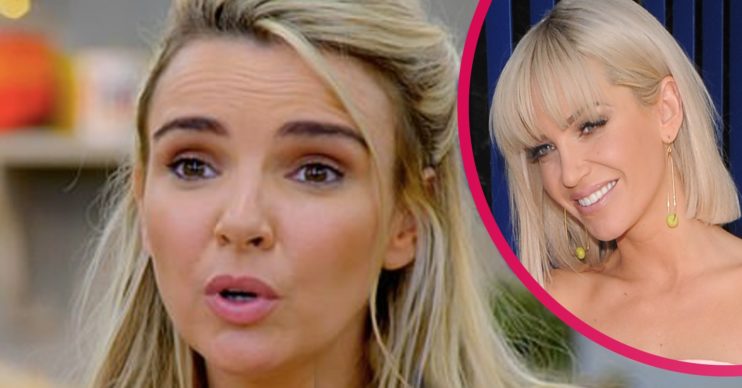 GBBO viewers were in tears on Tuesday night after Nadine Coyle hinted she was baking in tribute to Sarah Harding who is battling cancer.

The celebrity series is in aid of Stand Up to Cancer, and Girls Aloud singer Sarah, 39, has terminal breast cancer.

Nadine, 35, was asked by host Matt Lucas, 47, if she’d been personally affected by the illness.

Read more: Is Nadine Coyle back with Jason Bell?

The singer replied: “Absolutely. I have a very close friend who is suffering from cancer at the minute.”

What did Nadine say to Matt?

Matt added that he was pleased she was raising awareness for the cause.

Nadine continued: “Absolutely, because it’s terrifying. You look at the statistics, the more research there is and the more money and funding there is to do that, the better people’s odds are.

“You never know when the next big breakthrough is going to happen.”

Finally, the star appeared to be fighting back tears when she added: “Hopefully very soon.”

Viewers took in droves to Twitter to share their heartbreak and predict that Nadine was definitely talking about Sarah.

One viewer tweeted: “I’m just so proud of Nadine for doing this, I can’t imagine how hard it was to talk about Sarah and have her in the forefront of her mind the whole time. I’m so happy she’s been able to do this and support her.”

While another viewer commented: “Nadine talking about Sarah Harding. You can see how upset she is. #GBBO.”

And a third viewer shared: “I want to hug Nadine, even just the slightest mention of Sarah has me almost crying so I can’t imagine how they all feel.”

When was Sarah Harding diagnosed with cancer?

Since then she has published her autobiography, and provided fans with several heartbreaking updates.

This includes her doctor telling her that she likely won’t see next Christmas.

An extract reads: “In December my doctor told me that the upcoming Christmas would probably be my last.”

She continued: “I am having a glass of wine or two during all this, because it helps me relax.

“I’m at a stage now where I don’t know how many months I have left.

“Who knows, maybe I’ll surprise everyone, but that’s how I’m looking at things.”