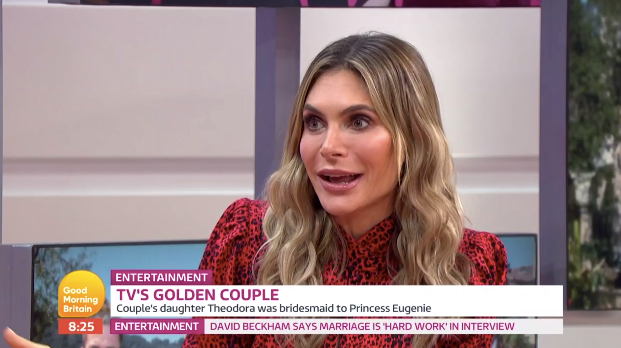 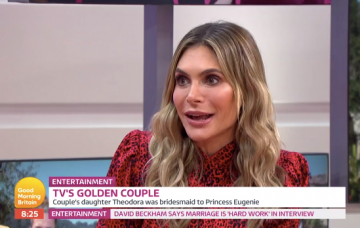 Ayda Field has joked daughter Teddy was so busy lapping up the attention at the Royal Wedding she “blanked” her after the ceremony.

The six-year-old was driven away from the chapel in a car with Princess Charlotte, three, with cameras capturing the little ones waving at the crowds lining the streets.

Appearing on ITV’s Good Morning Britain, Ayda said: “Can I just say, when she was in the car driving off, waving out the door, I and my mother we shouted out, ‘Teddy!’ and she literally blanked us.

Ayda, who attended the wedding with her mum and husband, Robbie, continued: “I thought she would be nervous – not at all, not at all. She took it very seriously.”

“Teddy’s a very well-behaved child,” added Ayda, “but you never know if they’re going to kick off or [say], ‘Don’t hold my hand’, or ‘These are my flowers’. They are unpredictable those little ones. So I was like, please, please, please….”

Ayda then joked: “She’s a mini Williams, so at any point she could have ripped off her clothes and been in her tiger pants, done something inappropriate!

“She was just like a dream. I was so proud. When she walked up the aisle, she didn’t know where I’d be standing, she saw me and she did a little cheeky smile and I got so emotional. It’s such a big stage and a big moment for everybody. She owned it, I was just so proud of her.”

The X Factor judge told GMB that Coco is “by far the chillest person in our house, including me and Robbie. She sleeps pretty much all day long, she doesn’t cry. She’s right now at perfect child status.

“I’m still waiting for it to turn where she just rips my hair out and just starts screaming and doesn’t stop. I’m sure that’s coming. It’s great when they’re that age! They don’t move!”

Ayda said life in the Williams house is “happy chaos” as they also have eight dogs, a cat and a turtle – but she wouldn’t have it any other way.

“It’s hectic. I’m always saying to myself, there aren’t enough hours in the day, which I think any working mum says to herself,” she said.

“I wouldn’t have it any other way.”

Ayda will kick off the X Factor live shows alongside Robbie, Simon Cowell and Louis Tomlinson on Saturday night.

“I’m really excited. I keep asking myself if I’m nervous yet because I haven’t felt nervous yet. I’m sure tomorrow I will,” she said.  “I think I’ve got the winner for sure, 100%. Listen, I’m going to put money on all of them, every single one of them.”

Did you watch the Royal Wedding? Leave us a comment on our Facebook page @EntertainmentDailyFix and let us know what you think!