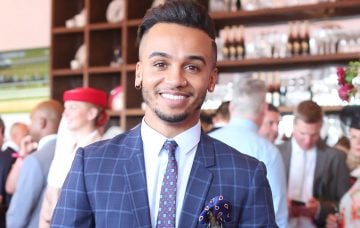 The former JLS singer, who appeared in the last series of Strictly, took to social media overnight to share a sweet video of his beautiful newborn baby.

Posing with fiancée Sarah Richards, a besotted Aston told fans: “We are very happy people right here. Let me introduce you to our son, Grayson.”

He then panned the camera down to show Grayson looking absolutely adorable while sleeping in his cot.

Aston and Sarah announced Grayson’s birth on Wednesday, with Aston sharing a beautiful photo showing him cradling his tiny son.

He captioned it: “Life is now complete.”

Yesterday was a busy day for little Grayson, who arrived on January 30, because not only was he introduced to his dad’s fans, he also met two of his dad’s best friends.

Aston’s former JLS bandmate Marvin Humes dropped by with his wife Rochelle to meet the baby on Wednesday – and both Marvin and Rochelle were smitten!

The couple, who have two young daughters, both posted photos to Instagram showing them cuddling Grayson.

Marvin wrote: “There’s no better feeling in the world than new life… proud Uncle moment! Congrats to Aston and Sarah on the birth of this beautiful boy Grayson.. he is incredible.. and yes my wife is now broody.”

Rochelle, meanwhile, said: “Love at first sight. You have no idea how much you are loved little man. Proud Auntie. Grayson Jax you are a beauty. Well done Aston and Sarah – you are very clever!”

Aston and Sarah announced back in September that they were expecting their first child.

And with a due date of January 2018, Baby Merrygold arrived just in time!