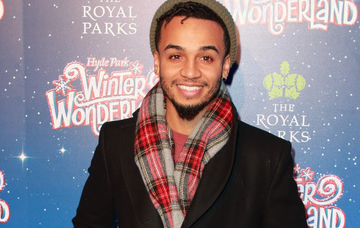 Aston Merrygold picks his 12-month-old son to be his best man!

Loving dad says he and Grayson will wear matching suits

Aston Merrygold’s baby son will be best man at his wedding.

The former JLS singer got engaged to Sarah Richards in December 2017 – just weeks before they welcomed little Grayson into the world – and he’s determined the 12-month-old tot will play a big part in their big day.

Asked if the toddler will have a role in the wedding, he told OK! magazine: “A hundred percent. Mum says he’ll have the same suit as me.

“He’ll be walking by that time and he’ll be my best man.”

However, the 30-year-old star admitted he and his bride-to-be have done very little towards planning their wedding because they get “distracted” so easily.

He joked: “We try and sit down and plan it but something always comes up and we get distracted. Right now we’re saying, let’s just go to Vegas and do it.

The former Strictly contestant also light-heartedly said a wedding planner would be “disappointed” in how the couple had prepared for the big day.

Aston admitted they don’t really want to get wed in Vegas as they’d rather tie the knot at home.

Since becoming a father, Aston thinks his relationship with Sarah has changed for the better.

Asked how parenthood has affected their relationship, he replied: “There are three of us now, full family – not that it wasn’t before but we don’t just have each other now.”

Aston has previously hinted the couple may want to have another baby in the future.

He said last year: “We’ve both said if we ever did want to go again, two for us is a good number.”