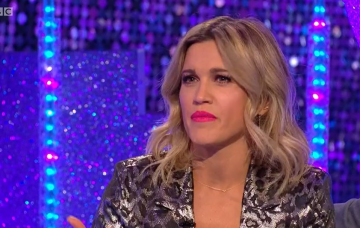 A source revealed: "Imagine going to work when people don't want you there"

Strictly Come Dancing standout Ashley Roberts feels unappreciated on the show after weeks of negative reactions from viewers, according to a report.

Former Pussycat Doll Ashley, 37, has found herself in the dance off bottom two for the last couple of weeks in a row, despite racking up high scores from the judges week after week.

It has been speculated TV audiences are failing to get behind one of the most talented performers in this year’s line up because of Ashley’s extensive training and professional experience as a dancer.

And the Mail on Sunday also claims the creeping rejection from viewers stings because telly bosses were in no doubt about her performing history when she was approached to take part.

An unnamed source is reported as telling the newspaper: “Ashley feels she is not wanted on the show and it is terribly sad for her.

“She is particularly upset because she wasn’t the one who went to the BBC, begging to be signed up for Strictly.

“They approached her, knowing full well what she had done in the past. This has been so sad for Ashley. Imagine going to work when people don’t want you there.”

Ashley, who has trained in a variety of dance styles since childhood, has come under fire from some Strictly fans for having an ‘unfair advantage’ over dance novices such as Graeme Swann, Joe Sugg and Lauren Steadman in the BBC One competition.

Comments from ex cricketer Graeme about keeping dance accomplishments secret as he was eliminated were also interpreted in some quarters as a dig against her before he clarified there was no lingering bad feeling between the dance off rivals.

However, Strictly host Tess Daly has leapt to Ashley’s defence, insisting she trains “as hard, if not harder” than the other contestants.

During an appearance on Lorraine, Tess said: “She’s got experience in a girl band dancing as a pop star. But ballroom dancing is a very different discipline.

“You never saw the Pussycat Dolls doing a Viennese Waltz, for example. It demands a different set of skills.

“She trains as hard, if not harder than anyone else. She’s in the studio 12 hours a day, they all are.”

And in a recent Instagram post, Ashley – who appeared in music videos for the likes of Pink and Counting Crows before joining up with dance troupe the Pussycat Dolls in 2003 – insisted Strictly has changed her life.

She revealed: “When I got asked to do Strictly, I remember my heart feeling like it was going to burst.

“This has been a very turbulent year for me, and so being a part of Strictly has been healing on so many levels.

“I often find it hard to be vulnerable and share my highs and lows, as I’ve always learned how to keep going, chin up and stay on my game.”

Chin up indeed, Ashley! Let your feet do the talking for you… and keep dancing!