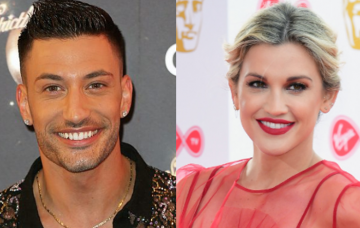 Ashley Roberts and Giovanni Pernice pictured together on social media

Have Strictly pair made their debut as a couple?

Strictly Come Dancing stars Ashley Roberts and Giovanni Pernice look to have made their social media bow as a couple.

Earlier this week it was reported the pair had ‘confirmed’ their budding romance after they were snapped arriving in Florida together.

It was claimed they had spent several days enjoying a secret holiday in the West Indian paradise of the the Turks and Caicos islands before heading to Miami to spend Christmas with ex Pussycat Dolls performer Ashley’s mum.

And even though Strictly pro Giovanni, 28, has recently played down rumours he and Ashley had been spotted snogging at the BBC One show’s end of series party, this first appearance together on Instagram has raised fan hopes they are an item. 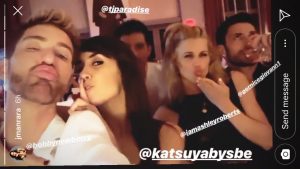 A dinner date at an upmarket Japanese eatery with dancing co-star Janette Manrara seemed to suggest to many observers that 37-year-old Ashley and Italian hunk Giovanni may be more than just friends.

In a short clip uploaded to Janette’s Instagram Stories, the duo look very cosy as Ash blows a kiss and Giovanni sips a drink.

Ashley, who made the finals of the BBC One dancing competition alongside Pasha Kovalev, previously responded to rumours of a romance with Giovanni in November.

Admitting they had gone out for drinks just by themselves, the US star nonetheless dismissed the idea they were dating – despite feeling Giovanni as a “lovely guy”.

Giovanni, meanwhile, has been a little more definite with his denials.

Asked by The Sun about their link, the Italian heartbreaker said: “We’re just good friends, nothing more.

“She’s an amazing dancer and person, but we’re not dating.”

However, although insisting he had not time for being involved with somebody, Giovanni also hinted to New! magazine that Ashley had certainly caught his eye.

“I say the same thing. She is beautiful, absolutely, but there is no chance that we’re going to be in a relationship right now,” he said.

Giovanni – also a finalist with Faye Tozer – also noted how he been repeatedly rumoured to be seeing his dancing partners on the show in previous series.