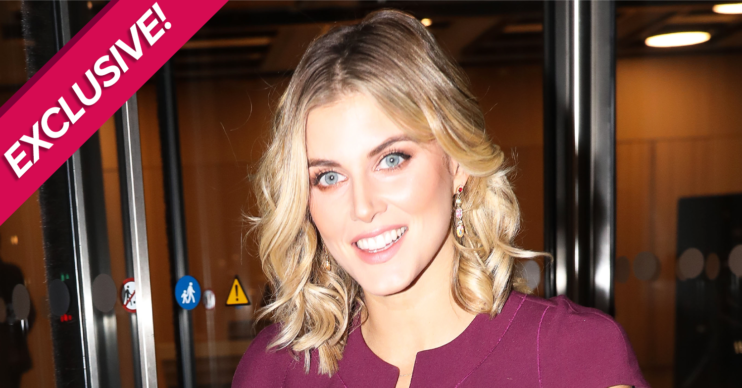 Pregnant Ashley James has opened up about being cruelly “mocked” for having a “wonky boob”.

Ashley, who is expecting her first child with boyfriend Tom Andrews, spoke to Entertainment Daily about her changing shape.

And she also revealed the torment she endured in her teens after finding a lump in her breast.

Ashley said: “That was one of the things I found really hard about being a teenager because I was mocked for having a wonky boob.”

The former Made In Chelsea star was just 15 at the time and hated the fact that her bigger-than-average breasts were “so sexualised by society”.

Ashley James on her her ‘wonky boob’

As a result of being told to “cover up”, it was a while before Ashley sought medical help.

She told ED!: “Because it was boobs and I was told to cover up, it was one of the reasons I left it so long to go to anybody and tell them about the lump.

“So it was 250g when it was removed, basically the size of a bag of sugar.”

Ashley said she was left with stretch marks, with the redness fading away to gentle white lines that she now sees as a “beautiful tapestry” of her life.

It was 250g when it was removed, basically the size of a bag of sugar.

However, it wasn’t always that way and the star revealed that she’s been on a “huge journey with my body image and body confidence”.

“I’ve always had big boobs and I’ve always had a love/hate relationship with that,” she said. “It’s taken me a long time to accept my body, I guess with them being so sexualised in society.”

During her pregnancy, Ashley revealed her breasts have grown by five sizes, but she’s loved the experience.

“I’ve loved watching my body change and it makes me feel really sad that a lot of women don’t take pictures of themselves pregnant because they feel negatively towards their body or see themselves getting bigger as a negative,” she said.

Ashley did admit that her growing boobs are a bit “annoying” when it comes to bra shopping, though.

“Bras are just so expensive. You spend £40 or £70 on a bra and it lasts you a couple of weeks and then you need another one. It’s something men never have to think about,” she quipped.

“Now they’ve got bigger it’s like, what on earth do I wear now? It’s almost like getting to know a new body.

“But I think it’s amazing, and it’s made me even more angry that our boobs are sexualised because I am like, these are my udders!” she said.

“Udders” that will most definitely come in handy when Ashley – who appeared on Celebrity Big Brother in 2018 – becomes a mum to a bouncing baby boy later this year.

Ashley is an ambassador for digital security experts, Kaspersky. Visit the website here for more details.

Visit our Facebook page @EntertainmentDailyFix and tell us your thoughts.