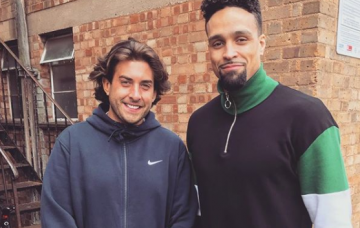 Ashley Banjo has praised James ‘Arg’ Argent for having the courage to strip off for a good cause on Wednesday night’s The Real Full Monty Live.

TOWIE star Arg had expressed concerns about revealing all next to buff bods like professional dancer Ashley’s, but overcame his fears to take part in the hugely successful live show.

Ashley, who choreographed the routine performed to a large audience in Sheffield and broadcast on ITV, has now shared his pride at Arg’s involvement.

“Whether you’re a man or a woman – If you’re not happy with you’re weight then set yourself a goal and do something about it. BUT make sure you love yourself for what you are in the moment as well – whatever stage you’re at!”

Referring to Arg, he wrote: “It took him a while to get there but @real_arg proved it last night… it’s all a state of mind. He stripped live with a huge smile and a ton of CONFIDENCE and you know what… He looked AMAZING because of it!

“Well done mate and thank you all again for your messages, the response is overwhelming.”

In rehearsal performances in front of smaller audiences before the big night, Arg, 30, chose to keep his T-shirt and pants on while his fellow celebs including Jeff Brazier and Ainsley Harriott stripped off.

He also declined to shower with the men during pre-recorded scenes shown on Wednesday.

But on Thursday night, Arg won praise from viewers after he dared to bare all in front of millions.

Speaking about why he did it, Arg told his Instagram followers that it was all in honour his his late granddad.

He wrote: “My Grandfather Seamus Hanley died of Prostrate Cancer 15 years ago. He was my best friend who I love & look up to!

“I’m taking part in this in honour of him & his memory. I will Not let him, My family, friends & the lads down! I’m not confident in my body or appearance at the moment and finding it hard but it’s not about me, It’s about Beating Cancer & Raising awareness!”

After The Real Full Monty aired, Arg posted again, to say he was so proud and happy he’d gone through with it.

“WE ACTUALLY DID IT!!!” he wrote. “Thank you so much for all of your love & support, it’s overwhelming. I honestly didn’t expect this type of response & reaction. It means the world to me. I can hold my head up high now, I feel proud & have a great sense of achievement!”

He added: “I couldn’t of done it without the amazing @ashleybanjogram & the rest of the lads! The hard work paid off! It’s an experience I’ll never forget and I’ll always cherish…”

She wrote alongside a picture of them together: “So PROUD of you tonight #realfullmontylive you’re always gorgeous to me no matter what and don’t like to see you so insecure about your body you must never be insecure and always own who you are all different it’s what’s in your heart that always counts.”

The celebs stripped off on Wednesday night to raise awareness of men’s cancer and to encourage men to have regular check-ups.

Read more: Holly Willoughby admits worries about weeing herself on This Morning!

On Thursday night it will be the females turn as stars including Michelle Heaton and Coleen Nolan take to the stage for The Full Monty Ladies Night, on ITV at 9pm.

What did you think of The Real Full Monty Live?  Leave us a comment on our Facebook page @EntertainmentDailyFix and let us know what you think!