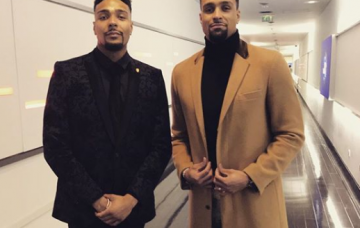 Little Cassius Ashley Banjo was named in honour of his uncle

The Diversity founder looked absolutely besotted as he gazed down at his brother Jordan’s tiny new sleeping son.

Little Cassius was born on Monday 7 and has been given the middle name Ashley in honour of his uncle.

Alongside the beautiful photo, shared to Instagram, Ashley wrote: “Well, what can I say little man… You’ve definitely gone one better than me on the name front 😄 I’m honoured that your mum and dad decided to include me in naming you.

“I will always do my best to look after you, your mum and your dad. I can’t wait to be a part of showing you the world 🌍!”

Ashley, 29, then joked: “Now hurry up and grow… There are routines to learn, plenty of food to eat and if Jordan has anything to do with it – grandmas to prank 😂🙌🏽😃 Love ya Cass 👊🏽.”

He added hashtags including “new baby”, “blessed”, “family” and “next chapter in life”.

Jordan, 25, announced the new arrival on Wednesday, saying he and girlfriend Naomi Courts had chosen to keep the happy news to themselves for a couple of days.

Jordan announced the happy news via Instagram, alongside a photo of himself carrying Cassius in a little baby seat out of the hospital.

He told fans: “Myself and Naomi haven’t shared this straight away because we wanted to take some time to appreciate and enjoy the beautiful moment that we had as a family… but on the 07.05.2018 at 12:29am our beautiful son was born!

“Words cannot describe the feeling of seeing your future come into this world. I’m so proud of mum & baby, both are doing absolutely amazing and Naomi, you are a super woman. If I didn’t know it before, I do now, I am the luckiest man there is.

New mum Naomi also shared the news via her own social media accounts, posting her own image of Jordan cradling his tiny newborn son.