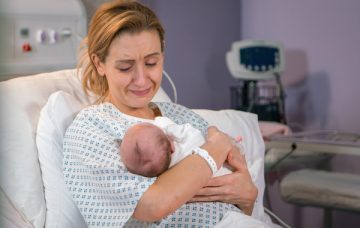 As Eva gives birth, 7 even more dramatic deliveries in soap

Most soap babies don't have a smooth arrival!

Toyah should be calm as a cucumber in birth crises by rights, having helped to deliver her nephew Oliver in a lift  February, 2018. Leanne went into panic mode when her waters broke between floors in the lift, which then got stuck – and the alarm broke (of course)! Toyah, was forced to help the baby into the world with help from Rana who shouted medical instructions to her from outside.

Tony Gordon turned knight in shining armor when he helped deliver grieving (almost) widow Maria’s baby son, after she went into labour on a secluded beach in June 2009. He gallantly wrapped her tot, Liam – named after his later father – in his T-shirt as the little bundle arrived in the world in a beach hut. Little did Maria know at the time that Tony was behind her beloved fiance’s death.

3. Sonia delivers on the sofa, EastEnders

Poor Sonia Jackson actually thought she was dying when she went into labour in 2000. The 15-year-old had no idea that she was even pregnant! The Slaters heard her screams from next door and rushed round, assuming her boyfriend Jamie was knocking the schoolgirl about.

There was a soap first as Fiz Stape gave birth to baby Hope during the show’s live 50th anniversary episode in 2010. Her little daughter arrived three months early and, as she worried about whether the tot would survive, her killed husband John headed back to the Street to cover the tracks of his murderous, er, misdemeanors.

Priya was forced to give birth in a country lane in the back seat of a car, after the vehicle broke down on the way to the hospital. Alicia helped to deliver the baby but when the ambulance crew arrived, she wasn’t breathing. Fortunately, after a few weeks in intensive care, little Amba was allowed her.

In May 2015, the nation’s soap fans fell in love that little bit more with Mick Carter as he supported his darling Linda through a traumatic birth. She had been raped by his brother Dean and faced an agonising wait throughout the pregnancy to discover which of them was the father. Thankfully Mick was confirmed as the daddy of little Oliver days after his arrival.

In the most harrowing soap scenes to have ever aired, Michelle went into labour at 23 weeks in January, 2017, and was forced to give birth early. Her little son, Ruari, arrived stillborn, with Michelle and Steve naturally devastated. The scenes were all the more poignant as actress Kym Marsh had lost her own baby, Archie, who died just minutes after being born prematurely, in 2009.