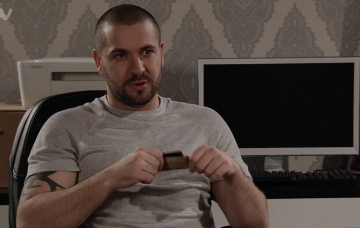 As Corrie’s Aidan takes his life, seven other times soaps have tackled suicide

It's a tough subject for TV to cover

Coronation Street is to tackle one of its most devastating storylines in its history as beloved character Aidan Connor takes his own life.

His death will come as a complete shock to his friends and family when they discover the awful truth on Wednesday, as they had no idea that he was struggling with his mental health – indeed many saw him as a confident young man with the world at his feet.

It’s not the first time soaps have dealt with suicide storylines; there have been a handful of other heartbreaking deaths.

Each of them carried an important message, handled sensitively in the hope of raising awareness of a subject that’s too little discussed.

Probably one of the saddest deaths in Corrie history, fan favourite Hayley Cropper decided she wanted to die with dignity after being diagnosed with terminal pancreatic cancer.

Hayley and husband Roy argued after telling her husband Roy that she wanted to die when the cancer spread, the pair argued before Roy eventually understood Hayley’s wishes.

On January 20 2014, with Roy by her side, Hayley swallowed a lethal cocktail of drugs to end her life.

In May 2016 Peggy Mitchell returned to Albert Square to spend time with her family after refusing treatment for the cancer which had recently come back.

She decided that she didn’t want to die as a weak old woman in her bed and secretly took an overdose of painkillers, dying in her sleep on May 17.

Donna Windsor – who was dying from terminal lung cancer – died a hero when she jumped from the roof of a multi-storey car park, dragging criminal Gary North, who’d been threatening her daughter April, her boyfriend Ross Barton and was just a general wrong’un, with her. Before she jumped, she told Ross that she loved him.

Remember Martin Platt’s teenage lover Katy Harris? She took her own life back in 2005 after a tragedy-tainted stint on the cobbles. First of all she fell pregnant by Martin but was duped into having an abortion by her dad Tommy who lied to her that Martin was having an affair.

When she found out her dad had been lying, she belted him over the head with a wrench, killing him. Her mum took the blame and went to prison while diabetic Katy, unable to cope with the guilt, drank a glass of sugar water which killed her.

Fan favourite Ethel was diagnosed with inoperable cancer back in 2000 and – in devastating scenes – she asked her best friend Dot Cotton to help her end her life.

Like Peggy and Hayley, Ethel wanted to die with dignity instead of passing away in agony and she stored up morphine pills.

Dot initially refused to help her but when Ethel became too weak to take the pills herself, Dot stepped in and Ethel passed away in her sleep.

Jackson was paralysed from the neck down after a car crash and begged his mum Hazel and boyfriend Aaron Dingle to help him end his life.

They tried to show him his life was still worth living but Jackson didn’t change his mind and Hazel and Aaron agreed to assist his suicide.

Hazel brought him some pills but couldn’t bring herself to help him take them so Aaron did it instead.

Alison was married to Kevin Webster after Sally and gave birth to their son Jake in 2000. Jake tragically died shortly after birth from a virus passed onto him by Alison.

She blamed herself and spiralled into depression, snatching newborn Bethany Platt from the hospital before running off.

Kevin saved Bethany’s life before Alison ran into the path of an oncoming lorry.

If you are struggling with depression or suicidal thoughts, or are concerned about a loved one, please contact Samaritans free on 116 123 for support and advice.