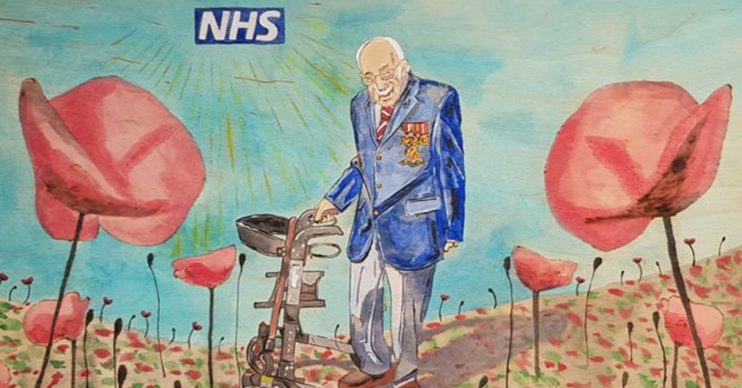 A South Wales-based artist is hoping to raise cash for the NHS with his beautiful tribute to WWII veteran Tom Moore.

Passionate painter Jonathan Morgan, 35, has revealed his wish to raffle off his artwork to raise money for Britain’s health service as it battles the deadly coronavirus.

Jonathan, who has a background of painting Remembrance-themed pictures, said it was Tom’s status as an ex-serviceman that inspired him to make the 99-year-old the subject of his next piece of art.

“The Army background has always been a big thing with me,” he told ED! “Because my father was in the forces for 30 years. I was very interested in what Tom has done and the amount of money he’s raised for the NHS has been amazing.

Tom’s painting, achieved through a combination of pryrography and watercolours, features an image of Tom and his walker surrounded by a field of poppies.

“When I can do it, I like to do Remembrance pieces of art,” he said. “That’s something I added into the Tom Moore painting.

“I’ve done Remembrance pieces for my father and he has them up alongside his medals in his house.”

Jonathan said he hopes to get in touch with Tom, who has raised millions by walking up and down his garden ahead of his 100th birthday.

But he understands it could be difficult at the moment.

He continued: “It’s amazing the amount of money Tom’s raised for the NHS. I got a message from his neighbour, who has been trying to speak to his daughter for me. But at the moment as you can imagine, because he’s such a popular man, it’s very very hard to get through to him.”

There have been calls for Tom Moore to be be officially recognised for his fundraising efforts, with some suggesting a knighthood.

I want to raise as much as I can.

Of that, Jonathan said: “I think he should receive a knighthood. I know they’re trying to sort out Spitfires to fly over his house for his birthday. There are a couple of Facebook groups trying to sort something like that for his 100th.

“He definitely deserves to have something. For what he’s done and the age he is, it’s astonishing. Most of us at that age, we’d be lucky if we could do anything even remotely like that. It is amazing.

“I’d love to see if I can get Tom Moore to sign the painting but I understand that’s going to be nigh on impossible at the moment.”

Now, Jonathan has set up a JustGiving page to start a raffle, through which he hopes his Tom Moore painting will raise money for the NHS.

“I want to raise as much as I can, really,” he told us. “I’d love to raise a massive amount but it just depends how many people actually see the fundraiser and how many get involved.

“I wanted to sort it so I would be able to end the fundraiser on his birthday and send the painting out to the winner on that date (April 30).

“I don’t want to make any money from it myself, I’d just rather use it for a good cause.”

As Britain’s lockdown ticks over into its fifth week, Jonathan said his artwork is helping him through.

“If I can I do my art, that always keeps me busy,” he explained. “I haven’t been venturing out at all, really. I’ve gone out once or twice to the shops. And I’ve gone out for a little bit of exercise with the kids, but that’s about it.”

– You can get involved in Jonathan’s fundraiser here, at JustGiving.com