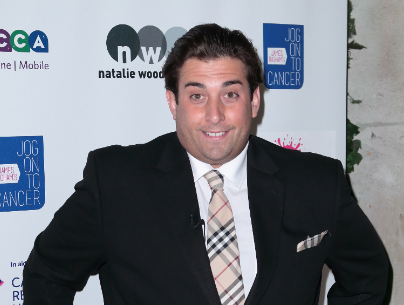 He's reached out to a showbiz pal for advice

James “Arg” Argent has reportedly reached out to a showbiz pal to help him get into shape.

The TOWIE star has apparently asked boxing champ Tyson Fury – brother of Love Island star Tommy – to give him tips on healthy eating and exercise.

“He has asked Tyson if he can help him shift the pounds because if he doesn’t do something drastic, his health is at risk,” a source told The Sun.

YOU BIG DOSSER!!! 🤣 Great to catch up with my old mate @gypsyking101 He’s inspiring me to get the weight off! Can’t wait to go on stage & perform American Pie together with my #TheArgBand 🙌🏽🎤🎸

“He is great friends with Tyson, and he has agreed to help him out. Arg gets on much better when he is doing something he enjoys, like being in a boxing gym.”

The pal added: “Tyson has said he can give him tips and advice to train efficiently. He said diet and discipline was a key factor and that is where Arg really needs to sort himself out.”

Arg, 31, has previously been told he needs to lose weight for the sake of his health – his BMI (Body Mass Index) is way above 30, classing him as obese.

He’s managed to lose weight before, looking super slim when he appeared on Celebs Go Dating back in 2017.

I’m a real life #goodfella hahahahaha I hope my date is ready! 😜

But the reality star, who is now dating Gemma Collins, has piled the pounds back on again.

Recently, he was told he needs to lose at least seven stone – and keep it off – to decrease his risk of developing obesity-linked illnesses including some cancers, heart disease and type 2 diabetes.

Speaking of his weightloss struggle earlier this year on This Morning, Arg said: “It seems like a marathon and isn’t going to be a quick fix.”

Now he’s hoping Tyson can help him with his battle against the bulge. He recently caught up with the boxer – known as The Gypsy King – in Brighton when they took to the stage together.

He told his Instagram followers that the heavyweight was his inspiration to lose weight.

“Great to catch up with my old mate @gypsyking101 He’s inspiring me to get the weight off! Can’t wait to go on stage & perform American Pie together with my The Arg Band,” he captioned a picture of them together.

As well as wanting to shape up to protect his future, the pressure is now on Arg to get fitter as he’s signed up for Channel 4’s new show Sink Or Swim.

He’ll joins stars including Olympians Greg Rutherford and Linford Christie, Love Island’s Wes Nelson and Hollyoaks’ Rachel Adedeji in an attempt to swim across The Channel to raise money for Stand Up To Cancer.

Arg recently gave his Instagram followers an update on their progress, in which he used the hashtag “failure is not an option”.

Beside a picture of himself and Wes ready for an open water swim, he wrote: “I’ve never worked this hard or been so committed to anything in my life!

“@wes.nelson has been so supportive & has motivated me. In 1 month we are swimming across the channel & leading our team to France in aid of @su2cuk #SinkOrSwim.”

Do you think Arg will be able to get in shape to swim The Channel? Leave us a comment on our Facebook page @EntertainmentDailyFix and let us know what you think!