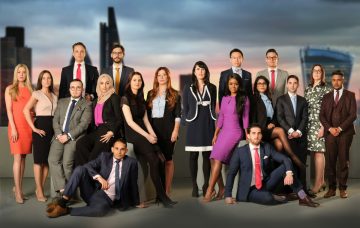 The 34-year-old businesswoman and her boyfriend Harrison, who she met on the BBC business show last year, have welcomed a baby boy into the world called Grayson Jones.

Michaela took to Instagram on Wednesday to share a snap of herself, Harrison and their new baby moments after she had given birth and another close-up shot of the tot.

It’s been a tough ride but I’m super happy to say Grayson George Jones arrives 23/10/18 weighing 7lb2 and looking like a heart breaker. Absolutely in love. And a huge big massive thank you to his amazing dad @harrisonjones89 who was the best birthing partner ever. Officially the most chilled guy on the planet #mumandson #babyboy #theapprentice #loveofmylife

Michaela gushed that she and Harrison are “absolutely in love” with the little one.

She captioned the pic: “It’s been a tough ride but I’m super happy to say Grayson George Jones arrives 23/10/18 weighing 7lb2 and looking like a heart breaker. Absolutely in love (sic).”

Michaela – who already has a son called Harrison – also praised her fellow former The Apprentice star, 28, admitting he was the “most chilled guy” while she was giving birth.

She wrote: “And a huge big massive thank you to his amazing dad @harrisonjones89 who was the best birthing partner ever. Officially the most chilled guy on the planet (sic).”

Meanwhile, Harrison announced the happy news on his own Instagram by sharing a string of snaps of their new bundle of joy.

Grayson George Edward Jones has arrived 😍😍 And on my mums 60th birthday too! What a present 🙌🏻❤️

Harrison wrote: “Grayson George Edward Jones has arrived And on my mums 60th birthday too! What a present (sic).”

The pair posted pictures of their little wrapped up in blue and white striped PJs and a beanie.

Michaela and Harrison’s little boy is the first ‘Apprentice baby’ that has been born throughout the show’s history.

Michaela revealed in June she was expecting the pair’s baby, and joked they had been the real winners of the The Apprentice after finding love.

She wrote: “Well I guess it’s out there. Me and @jones_harrison are gonna be having a little one. Who says we didn’t win the apprentice (sic).”

The couple’s relationship was revealed in January with an insider admitting there was a connection between the pair ever since they first met on the show last year.

The source told The Sun: “There was always a connection between them but they tried to resist their urges during filming. They’re now in a fully-fledged relationship and have been spending a lot of time together.

“Michaela was keen to publicly announce their romance but Harrison was more reserved about the idea. They are smitten with each other though. And other contestants from their series have been so happy to see they’ve made it official.”

Last year, Michaela opened up about her fertility struggles revealing she had six miscarriages before welcoming her first child, Harrison, and a further nine afterwards.

She told OK! Magazine at the time: “I don’t find it difficult to get pregnant, but I’ve had 15 miscarriages in total.

“I had six labours before I had Harrison, and they were giving me medicine to try and slow them down. So when he arrived, it was such a blessing.”

Can you relate to Michaela’s comments? Leave us a comment on our Facebook page @EntertainmentDailyFix and let us know what you think!