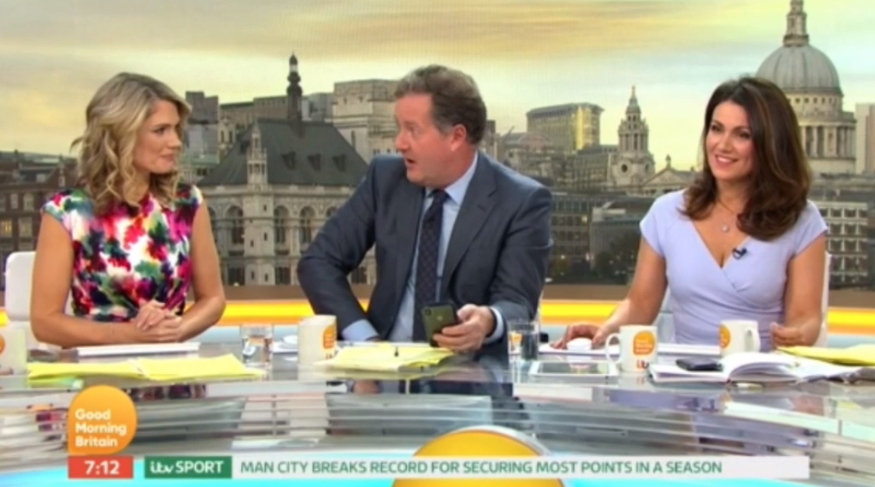 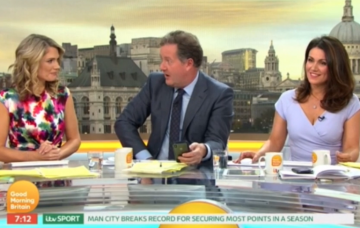 Piers Morgan has apologised to Charlotte Hawkins after making a remark about Charlotte’s BAFTA win.

The BAFTA TV awards took place on Sunday night and viewers saw Charlotte bag an award as part of the team on The Grand National coverage.

During Monday’s Good Morning Britain, Piers asked Charlotte: “Did I miss something? What did you win that for? I am told you were not on stage.”

“When I won a BAFTA with BGT I was on stage,” he added.

“I wanted to help them celebrate it. Jealousy is a horrible thing just because I’ve got a BAFTA and you haven’t.”

But his comments to Charlotte didn’t go down well with viewers, who took to Twitter to criticise the presenter.

Piers, 53, read out one person’s tweet live on air and apologised to Charlotte.

The viewer’s tweet read: “@piersmorgan… what a horrible, nasty, jealous person you are. Constantly putting Charlotte down. She’s proud of her BAFTA and you were a green eyed monster towards it.”

“Are you saying it to me or is this what you put on Twitter?” Charlotte cut in.

“You were fabulous darling,” he told his co-presenter. “Your BAFTA is as well deserved as… Love Island’s.”

That elicited a “hmmmm” in response from Charlotte.

Charlotte later replied to Piers’ apology on Twitter, writing: “Such a heartfelt apology…” 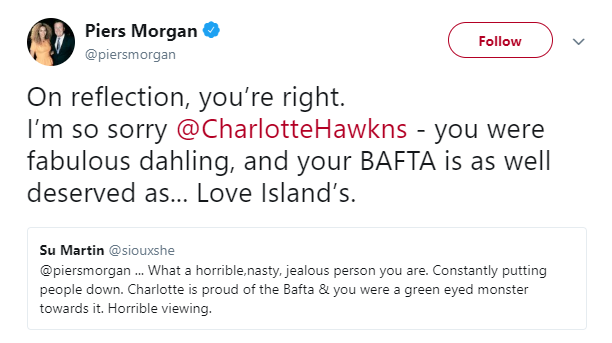 Piers is no stranger to winding up Charlotte on the show.

Last week, Piers mocked Charlotte’s outfit choice for the programme after she complained she was feeling a bit chilly in the air conditioned studio.

Charlotte opted for a floral summery dress, which was perfectly suited to the warm weather outside, but Piers told her to “put some clothes on.”

“I’m freezing,” Charlotte replied, as she stood up to showcase her outfit.

Piers asked: “I had a mad idea, Charlotte, have you thought of wearing any clothes to work?”

“I’m wearing a summer dress,” Charlotte hit back. “It is actually sunny outside!”

Continuing his rant, Piers said: “Maybe if you put some clothes on, you won’t feel so quite cold.”

“I’ll be wearing a jumper tomorrow in that case,” Charlotte quipped.