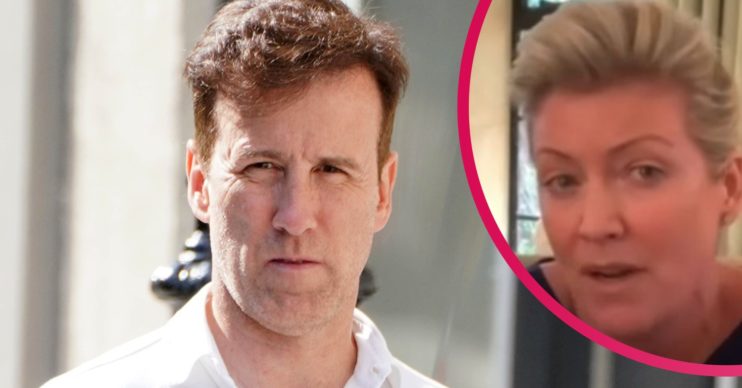 Anton Du Beke and his wife appeared on Lorraine today to talk about their IVF journey and her struggles with endometriosis.

During the chat on Wednesday (March 24), the Strictly star’s partner, Hannah Summers, raised awareness of the symptoms of the painful condition.

What did Anton Du Beke and his wife say on Lorraine?

Speaking to Lorraine Kelly from home, Hannah revealed how mortified she would feel whenever people would mistakenly think she was pregnant, because of swelling caused by the endometriosis.

She said: “The problem with me is, it’s quite hard to hide. It was one of those things where on a monthly basis, I looked like I was six months pregnant.

“One of the side effects is obviously the pain, but I had tremendous swelling. I was one of those women who was most asked that dreaded question, ‘When’s it due?’

“And I never got pregnant.”

Anton called endometriosis “perverse” for the fact it can make some women, who desperately want children but are unable to have any, look as though they might be pregnant.

The TV star has been a professional on Strictly Come Dancing since the show launched in 2004.

One of the side effects is obviously the pain, but I had tremendous swelling.

He and Hannah are parents to twins George and Henrietta, who turn four this month.

They got pregnant through IVF (in-vitro fertilisation), a procedure in which doctors insert a fertilised egg into the womb.

Speaking about going through the process on Lorraine, Hannah said that once a couple opt for IVF, it’s something “[they’re] very much doing together”.

She discussed Anton’s involvement, which included him administering some of the injections she needed in her buttocks.

Hannah joked there was “nothing glamorous or romantic” about it.

Last year, Anton said he thought being a dad was the best job in the world.

In a chat with the Belfast Telegraph, he revealed how fatherhood had completely changed him.

He told the newspaper: “Before, I used to do things for myself, but now I do everything for them. I love being a dad – it’s the best job in the world. I rarely think about myself now.

“It’s all about them. And you think much more about the future. I’m always considering the future in regard to them. That’s my role now. Tomorrow is very important for them.”