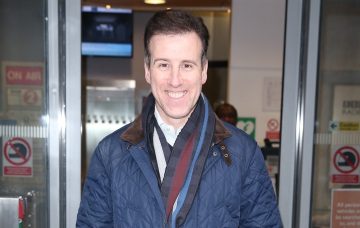 The dancer had twins 18 months ago

Anton du Beke has been killing it on Strictly Come Dancing since it began in 2004, but at home, he’s been facing a brand new challenge; becoming a dad.

Speaking to The Mirror about why he waited until he was 51 to have twins, George and Henrietta, now 18-months, the pro dancer revealed: “I wanted to be 100 per cent sure that my children’s mother would be the woman I would spend the rest of my life with. As soon as I knew I would be with Hannah forever, I wanted to have children with her.”

Anton has been with marketing executive Hannah Summers six years, after meeting at a golfing event, and they married last year.

The star adds: “Life has changed completely since the babies arrived, but in the most wonderful way.

“Doing all the family stuff, like going swimming and having splash time, well, it’s my very favourite thing.”

Anton said his twins are “doing everything at the same time at the moment” even though they have “quite different personalities”.

He added: “George is quite immediate, while Henrietta considers things more – having said this, as soon as she sees a mobile phone she wants it – more than any of her toys.”

The doting dad even revealed his twins are already dancing, saying they “love being twirled around the room”.

Earlier this year, Anton opened up on fatherhood saying he feels “so lucky” to be a dad.

While chatting to Tess for Heart FM’s Confessions Of A Celebrity School Run, the professional dancer said: “It’s the dream. It’s absolutely incredible. We are so lucky.”

Anton announced news about his babies on Instagram in March last year, posting a picture of two tiny pairs of ribboned booties with his signature stage top hat and cane.

Oh my! The little dancing feet have arrived. Mum and twins are perfect and dad is ridiculously excited! 💙💗

“Oh my! The little dancing feet have arrived. Mum and twins are perfect and dad is ridiculously excited!” he wrote.

The TV star – who released his first album, From The Top last year, and is now launching a novel, One Enchanted Evening – is partnered with presenter Susannah Constantine on this year’s Strictly.

However, after he and Susannah were awarded just 12 points from the judges on the first live show, including only one from Craig Revel Horwood, Anton came in for stinging criticism on social media.

One person tweeted: “Beginning to think that Anton is the reason his partners are so bad… it’s time for him to move on.”

Another wrote: “Really poor performance from Anton and Susannah. Where are his choreography skills?”

A third added: “Feel for Susannah being lumbered with Anton. She was let down tonight!”

And another irate viewer posted: “WHY did Anton create such a ridiculous spectacle for the lovely Susannah? That was a bad decision, she isn’t the comedy act!!”

TV star Susannah, 56, chatted to host Tess Daly while balancing a large pineapple on her head before the music started and Anton emerged shaking a pair of maracas from beneath his partner’s oversized dress.

Don’t listen to that lot, Anton, you’re doing great as a dancer AND a dad. And we can’t wait to read your book!

Would you be a parent in your fifties? Leave us a comment on our Facebook page @EntertainmentDailyFix and let us know what you think.