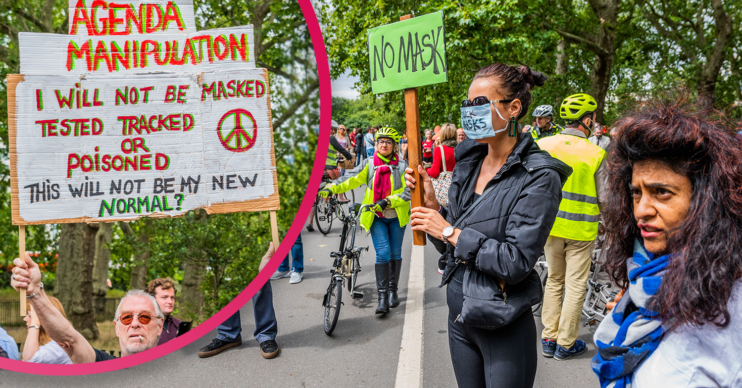 Hundreds of anti-mask activists gathered in London’s Hyde Park yesterday to protest against the mandatory use of face coverings in shops.

The march was organised by Keep Britain Free and saw protesters gathered in large numbers.

The activists held signs that read “no masks”, “f**k masks” and “I will not be masked, tested, tracked or poisoned”.

Another read: “This will not be my new normal.”

Keep Britain Free was founded by aviation tycoon Simon Dolan, who is estimated to be worth around £200 million.

Earlier this month, he lost a High Court battle to overturn the government‘s lockdown rules.

Launching the movement, he said: “I believe in freedom of choice for all and the protection of personal liberties.”

He added: “The government’s actions are crippling the economy, denying children education, and trampling over human rights.”

The movement’s website states the new face coverings rule was “the last straw, following 16 weeks of liberty-sapping regulations and laws imposed during lockdown”.

Another wore a mask with the front part which covers the nose and mouth ripped out.

One wore a vest that said: “Save human rights. No to 5G. No to vaccinations.”

Although the protest was peaceful, Brits weren’t impressed to see so many flouting social distancing while slamming the wearing of masks.

“Are anti-mask activists an experiment in natural selection?”

“I don’t get the anti-mask protests,” said one.

He added: “In life there are two sides to a debate for almost everything, but surely it’s hard to argue with trying to save lives and supporting public health? Health over politics.”

I hate to say people are thick but there’s no other explanation for this nonsense.

Another said: “Are the anti-mask activists unwittingly an experiment in natural selection?”

A third said: “If the anti-mask protesters were documented and the NHS turned them away for COVID-19 treatment, would they protest? All morons should be documented and scratched from NHS. Enjoy paying for Bupa!”

“These people have no common sense,” said another.

I hate to say people are thick but there’s no other explanation for this nonsense. They’re thick…

Wearing a mask in shops is fine. Just take it off when you get outside! If it helps in any way keeping the country going then how can you be against this…?

To those who won’t wear a mask while out shopping:TRY BEING ATTACHED TO A VENTILATOR!

If they don’t want to wear masks.

They shouldn’t get a ventilator either.

It has been shown that if enough people wear a mask, it could cut the risk of transmission of coronavirus.

As a result of the new rule, come July 24, anyone not wearing a mask in shops will be fined £100.

However, this will be cut to £50 if they pay within a fortnight.

Head to our Facebook page @EntertainmentDailyFix and tell us what you think of the protest.