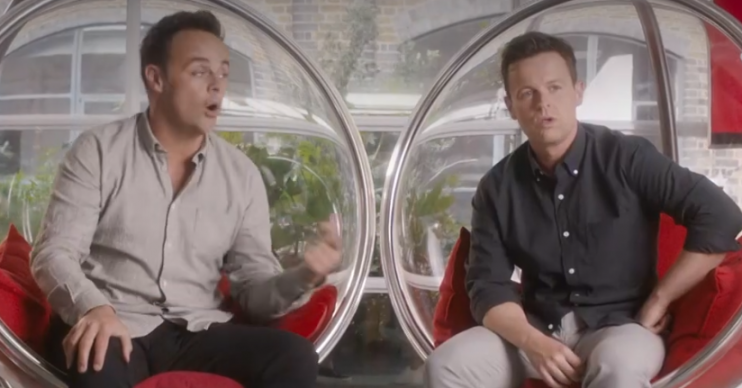 High street bank Santander has been slammed for drafting in telly favourites Ant McPartlin and Dec Donnelly for its latest promotional campaign.

Some customers have even threatened to leave after seeing the company’s new advert, which features the Britain’s Got Talent presenters discussing the launch of their own bank.

Taking to Twitter, one angry customer wrote: “This morning I am seriously contemplating changing banks. Best wishes, a Santander customer.”

Another tweeted: “This is taking the pee, isn’t it. Getting this idiot to advertise your product. I will be going to local Santander. To close up the account.”

Someone else said: “Time to close my Santander account, methinks.”

A fifth fumed: “Cringeworthy. Only just transferred from Bank of Ireland to Santander. Seriously reconsidering going back.”

Another commented: “I’ve been with Santander a long time but if these two are endorsing it time to rethink. Bad move Santander.”

Many seemed to take issue with the fact that Santander was using Ant, referencing his recent drink driving conviction, as one demanded: “Who else did you have on the shortlist? Shamima Begum? Please provide your justification of having the ‘Britain’s Biggest drink drive fine payee’ as the face of your new campaign. Honestly a joke.”

Echoing that sentiment, another said: “I’m surprised Santander want to associate themselves to someone who has a recent conviction for drink driving. Perhaps Peter Sutcliffe had already turned them down?” 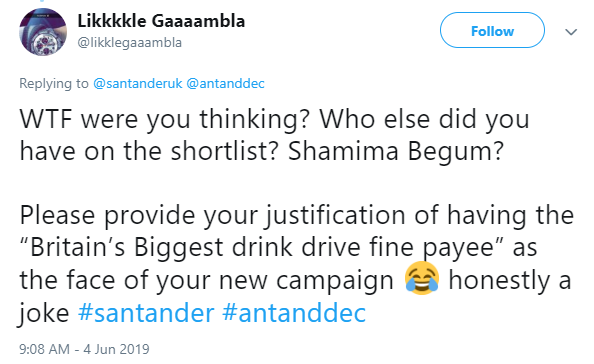 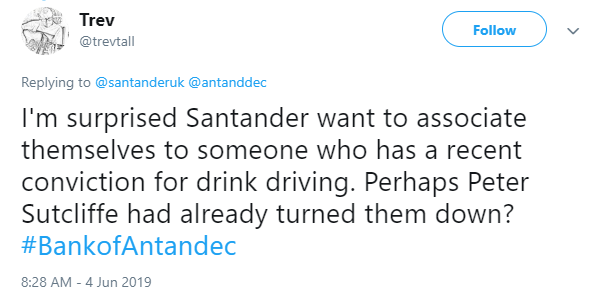 In the advert, Ant and Dec explain that their TV careers were really just a “gateway” to their true passion – banking.

They then unveil the name of their bank, ‘Antandec’, before explaining that they keep their team motivated with “free biscuits”.

In another scene, Dec offers up an idea on how to overpay on your mortgage – saving money by getting your coffees from an in-bank coffee shop that serves up brews in Barbie-sized mugs.

Sipping from the minuscule cup, one person admits: “It even tastes tiny.”

At the end of the ad, Dec says: “No one had really heard of ‘banks’ before we did it. It’s the future.”

Ant then chimes in: “We live in the future, man!”

Despite the backlash, some Ant and Dec fans thought the ad was hilarious and came out to defend Santander’s campaign.

“This made me laugh. As for all the moaning [bleeps] saying @antanddec have sold out, get a grip on reality!” wrote one telly fan, adding: “We need a bit of humour in our lives. Watch the ad again and understand the irony…”

“Love this, love the lads. Reading some of the comments on here are childish. Grow up haters, move on in life. I bet u would quickly more on if it was your family member or a celeb you really love. Also Santander and Ant and Dec don’t care what you think,” said another. 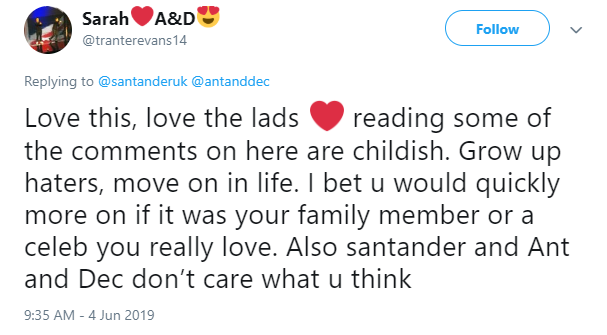 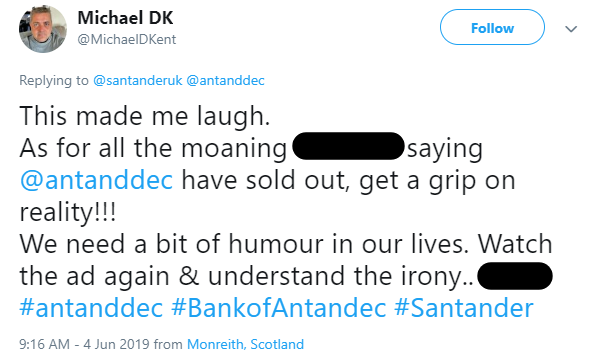 ED! contacted Santander for comment and the bank responded: “We are delighted to have partnered with Ant and Dec who are not only two of the UK’s most loved celebrities, but who also appeal to a variety of our different customer audiences.

“We are confident that we have done our due diligence on the partnership and although we appreciate that not everyone may be a fan of the duo, the reaction among both the public and our colleagues has been overwhelmingly positive.”

What did you think of Santander’s Ant and Dec advert? Leave us a comment on our Facebook page @EntertainmentDailyFix and let us know.