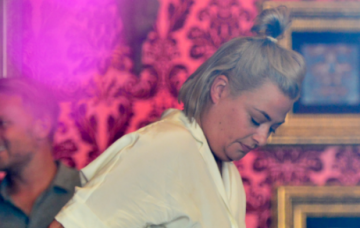 Presenter is on a romantic break in Italy

There’s only one thing worse than learning the ex you aren’t over has moved on, and that’s witnessing first hand how much they have moved on.

Earlier today  The Sun published pictures of Ant McPartlin with his new girlfriend, Anne-Marie Corbett, looking loved-up during a break in Italy.

A follower of his estranged wife posted a comment on how upsetting it must have been for her to see this.

Sacred Dee wrote: “Seeing those pictures of Ant hugging his girlfriend and looking smitten must be so painful for Lisa @lisaAmakeup Really feel for her, it’s not nice to see your ex with someone else, but to see it all over social media and in the papers must be twice as hard. #hugs”

And Lisa concurred, with a crying face emoji.

According to The Sun, Ant was seen hugging his personal assistant lover, as they strolled around Florence taking in the sites.

Earlier this month, it was confirmed that the presenter would not be returning to presenting duties this year.

The 42-year-old is taking time out to concentrate on his health, after a well-publicised battle with painkiller addiction and alcohol issues, which was made public in June, 2017.

In April he lost his driving licence for 20 months and was fined £86,000 after pleading guilty to a drink-drive offence the previous month.

Back in January, the Saturday Night Takeaway host confirmed that he would be divorcing Lisa, his wife of 11 years.

The statement read: “In response to the recent speculation in the media, Ant is very sad to announce that, after 11 years, he is ending his marriage to Lisa Armstrong.