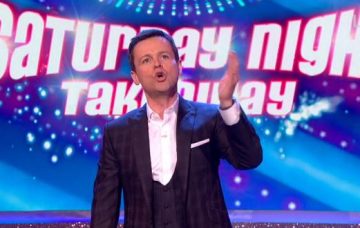 This comes as Ant McPartlin confirms when he'll return to TV

ITV has announced that Saturday Night Takeaway will not return for 2019.

Last series was fraught with drama this year, when Ant McPartlin pulled out near the end of the run.

Co-star Dec Donnelly presented the final two shows himself, and was roundly applauded for his solo skills.

But the decision has been made by him and Ant to leave the show for next year.

A statement released on their website explains that filming for next year’s show would normally have begun, and neither of its stars wants to compromise the quality.

The announcement also reveals that Ant, 42, will not return to television until 2019, so he will not be presenting this autumn’s I’m A Celebrity… Get Me Out Of Here!

In full, the statement reads: “Ant McPartlin today announces he will continue to take a break from all television presenting roles until 2019.

Ant has been taking a break from work to deal with personal issues.  His problems with alcohol and prescription medication came to light last June.

Ant pulled out of Saturday Night Takeaway in March this year, after he was involved in a drink-drive crash near in south-west London.