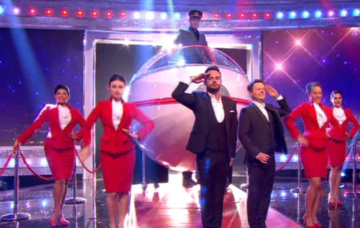 Ant McPartlin was left wincing and clutching his arm after crashing a monster truck on Ant And Dec’s Saturday Night Takeaway.

The presenter went head-to-head with Declan Donnelly in a live monster truck race as the programme returned to screens on Saturday night.

Ant surged over a ramp at the end of his final lap before crashing into two stationary cars.

He labelled the race a “tough, tough challenge” as he emerged from the vehicle holding his left arm before joining Dec and fellow presenter Stephen Mulhern.

Ant – who announced his split from wife Lisa Armstrong earlier in January – won the first challenge of the series after Dec spun his truck in the wrong direction.

He appeared fine as he returned to perform alongside Dec and Kylie Minogue later in the programme as the pop star performed a medley of hits.

Fans on Twitter shared their concern for Ant following the crash.

@UlstermamaBear wrote: “Hope Ant’s arm is ok from the monster truck! So concerned once he starting holding it.”

@LauraSBel posted: “Eeeeee that #AntVsDec challenge was not good for my nerves. I don’t know how @antanddec did it. Hope your arm is ok Ant.”

Read more: Are Ant and Dec considering a career change?

The episode also saw the presenting duo prank their Britain’s Got Talent co-star Amanda Holden as they fooled her into being part of a fake TV broadcast before bringing her face-to-face with her celebrity impersonator.

Appearing on the show to reflect on the prank, she told Ant an Dec: “I am still shocked.

“Honestly, because I thought it was live television. Everybody is watching this, everybody is seeing this.

“I was devastated,” she added.

Greeting her lookalike, Amanda joked: “Do you wanna do the school run, I literally need another me.”

Do you think Ant is back to his best? Let us know by commenting on our Facebook page @EntertainmentDailyFix!