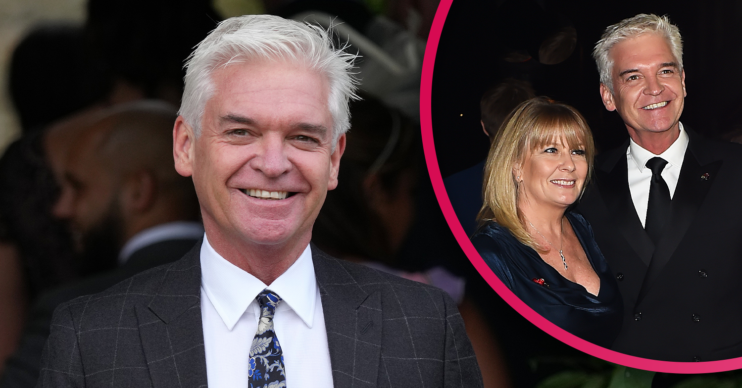 They were all smiles as they arrived at the church

Proving they’re still on good terms despite their split in February 2020, the one-time couple were seen arriving at the church together.

Not only that, but Phil was all smiles as he posed for pictures ahead of the nuptials.

What did Phillip Schofield say about Ant McPartlin and Anne-Marie’s wedding?

Phil was all smiles as he arrived with estranged wife Stephanie.

He wore a grey checked suit with a white shirt and patterned blue tie.

Seemingly coordinating with her husband of 27 years, Stephanie wore a navy blue wrap dress – and a glowing smile as she arrived at St Michael’s Church in Hampshire.

Chatting about the day, Phil told the Mirror the ceremony was “amazing”.

He revealed: “It was amazing.

“It was really fun, really nice, warm and cheerful.

“I really enjoyed it.”

What happened with Phil and Stephanie?

Phil came out as gay on This Morning in early 2020.

Read more: Ant McPartlin is all smiles as he arrives at church ahead of his wedding

He said he did so with the love and support of his wife and daughters.

The couple have ruled out getting divorced, but no longer live together, with Schofe moving out of the family home last September.

So what else happened at the wedding?

Well, Ant has revealed that he struggled to contain his emotions as “beautiful” bride Anne-Marie walked down the aisle.

He attended with his model ex Keeley Hazell.

David said: “It was very romantic.

“They have a great sense of humour so there were a few laughs.”

Head to our Facebook page @EntertainmentDailyFix and tell us what you thought of Ant and Anne-Marie’s wedding.