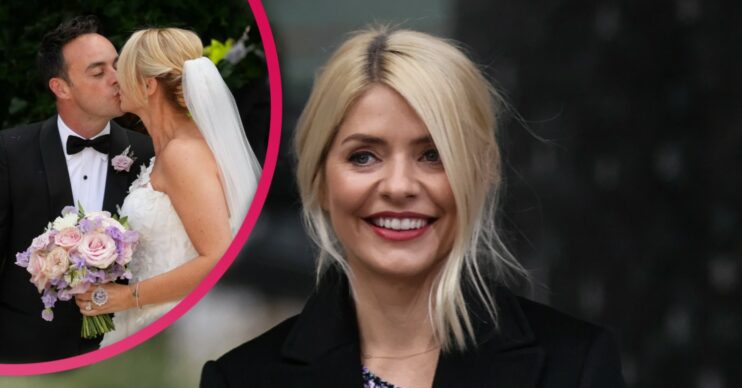 Ant got married at the weekend

Following the wedding of Ant McPartlin and Anne-Marie Corbett, Holly Willoughby sent the couple a cheerful tribute after missing the nuptials.

The This Morning host was notably absent from the big day on Saturday, but was keen to show her support to the happy couple.

Holly, 40, took to Instagram to leave a caring message for the newlyweds after seemingly not attending their nuptials in Hampshire over the weekend.

What did Holly say to Ant McPartlin after his wedding?

A delighted Ant shared an image of him and his new bride to his Instagram page just hours after the ceremony.

Holly then seized her opportunity to wish them well with a heartfelt reply.

The star-studded bash saw guests including Phillip Schofield and David Walliams in attendance.

Following the event, Holly’s co-host Phillip told the Sunday Mirror: “It was amazing. It was really fun, really nice, warm and cheerful. I really enjoyed it.”

David, who attended with his ex-girlfriend and former glamour model Keeley Hazell added:  “It was very romantic… They have a great sense of humour so there were a few laughs.”

What did Holly Willoughby miss?

The wedding took place at St Michael’s church in Hampshire, before guests headed to a luxury hotel for the reception.

Dec was also heavily involved in the ceremony, reading a prayer, and giving a speech where he called the groom the “best friend a man could have”.

Holly had been expected to be amongst Ant and Anne-Marie’s guests on the day.

Ant and Anne-Marie have been an item since 2018, with him proposing to her on Christmas Eve 2020.

The duo reportedly splashed a whopping £100,000 to ensure their 100 guests could spend two nights with them at the luxurious Heckfield Place Hotel.

Celebrations apparently went on for three days having kicked off with arrivals at the hotel on Friday night.

The celebrations ended with a group breakfast on Sunday morning before guests went their separate ways.