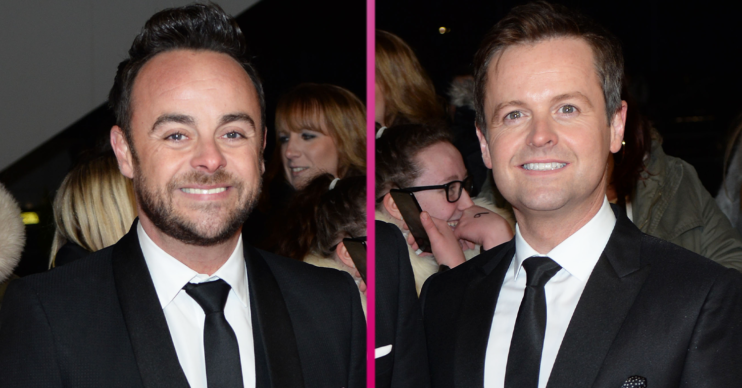 The pair split as Ant battle his demons

Ant and Dec have revealed they “split up” as Ant McPartlin battled his demons.

Back in January 2018, Ant announced his split from wife Lisa Armstrong.

His drink-drive arrest followed that April.

As a result, he was forced to pull out of his hosting duties on both Britain’s Got Talent and I’m A Celebrity – Get Me Out Of Here! while he went to rehab.

The episode naturally took its toll on presenting partner Declan Donnelly, but the pair have only just revealed the full effect it had on their relationship.

Writing in their new autobiography, Once Upon A Tyne, the best pals admitted they did think that perhaps they might never work together again.

Dec said: “There was a real chance we were never going to work together again. Not knowing if Ant and Dec would continue was very scary for us both.

“Since 1990 we’ve made every decision together for the sake of Ant and Dec. Every discussion we’ve ever had has been what are we going to do? What’s best for us?

“And now suddenly, we had to think about ourselves as individuals. What do I want to do? What’s best for me? That felt like an alien mindset to adopt and it was very frightening.”

Dec said it was working together on Ant & Dec’s DNA Journey that brought the pair back together.

“Looking back, when we went into DNA, our relationship wasn’t where it should have been. We were on autopilot, working too hard and taking each other for granted, but Ant’s break forced us both to evaluate everything, almost from the perspective of an outsider.

“It was something we really took time over. We both spoke to lots of people, friends and family, and we both individually came to the conclusion that we wanted to keep working together.

“It could have gone either way”

There were times in my recovery when I wasn’t sure I’d work again, or if I’d get to work with Dec, if we’d ever get to be Ant and Dec again.

Ant also revealed that, because of his health battle and other huge life moments such as Dec becoming a dad for the first time, it “could have gone either way”.

He said: “By the end of making DNA, our partnership was so much stronger than it had been at the beginning, because so much had happened to us both.

In just 5 days this could be you! Head to the link in our bio if you fancy a copy of #OnceUponATyne

“I’d gone through rehab and a divorce and Dec had become a dad for the first time. These are seminal points in your life, huge moments that, especially in my case, could have gone either way.

“There were times in my recovery when I wasn’t sure I’d work again, or if I’d get to work with Dec, if we’d ever get to be Ant and Dec again,” he said.

“That sounds crazy now, but at the time it weighed heavily on my mind, because, at first, my prime focus had to be on getting myself well.”

Once Upon A Tyne is out now and marks the pair’s 30 years in showbiz.