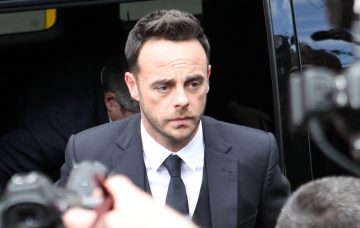 The Saturday Night Takeaway star, 42, appeared at Wimbledon Magistrates’ Court on Monday after being arrested on suspicion of drink-driving in March.

The court was told Ant had been twice the legal limit when he was arrested. He had 75 microgrammes of alcohol in 100 millilitres of breath, when the legal limit is 35mcg per 100 ml.

Ant stepped out of a black Mercedes people carrier to face the media scrum as he walked up the steps at the main entrance to the court building in south-west London, which was guarded by seven police officers.

He spoke to confirm his name, date of birth, address and nationality before pleading guilty to a single charge of drink-driving.

Ant had been scheduled to appear in court on April 4, but the hearing was adjourned until today.

He was arrested at around 4pm on March 18 after a failing a roadside breathalyser test following a collision between the Mini he was driving and two other cars.