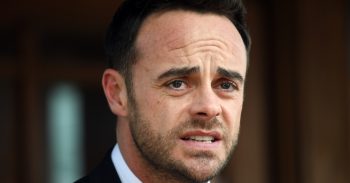 He embarked on some banter with BGT judge David Walliams

Ant McPartlin is preparing for his big TV comeback after some much needed time away from the spotlight.

And, as he gears up for his much-anticipated return in Britain’s Got Talent, he’s slowly coming out of hiding from social media, too.

And it’s only one of a handful of times he’s posted on Twitter since being caught up in a drink-driving scandal that threatened to derail his career.

While taking a year away from the spotlight to focus on getting his life back on track, Ant was mostly silent on social media.

🤣🤣 I was looking out of the rainy window to see you!
A https://t.co/EldXbFtNZ4

Obviously waking up in a mischievous mood, comedian David shared the video to Ant and Dec’s song Perfect, released when they performed under the name PJ and Duncan – the characters they played in Byker Grove.

Alongside the song, David teased: “@antanddec with a song they wrote about me. ‘Perfect’. WARNING – CONTAINS NUDITY.”

And, much as we love the Geordie duo, the video is CRINGE!

.⁦@antanddec⁩ with a song they wrote about me. ‘Perfect’. WARNING – CONTAINS NUDITY https://t.co/ErEq91Z8Bq

Seeing the funny side, Ant responded from his shared account with Declan Donnelly, joking about a scene in the video in which Ant can be seen singing through a rain-streaked window.

He said: “I was looking out of the rainy window to see you! A.”

Fans were thrilled to see Ant reappear, with one gushing: “Yay I’m so happy you’re back tweeting Ant. I love you to the moon and back.”

Best of luck with the movie Kidda!
Can’t wait to see it
A https://t.co/yPnZAYJeLK

A third said: “Ha ha!! Hope you’re well Ant, so lovely to have you back, I’ve missed you so much!! Love you to the moon and back gorgeous!”

Just the day before, Ant had posted a good luck message to his actor friend Daniel Mays, star of Line Of Duty.

He had wished him good luck with his new film and, again, his 6.75million combined followers with Dec were chuffed to have him back.

Ant pulled out of hosting last year’s BGT, but will be back in the new series this Spring.

He has also confirmed he’ll resume his duties on I’m A Celebrity in November.

The TV presenter went to rehab after his drink and drive conviction and the breakdown of his marriage to Lisa Armstrong.

Are you looking forward to see Ant McPartlin back on our screens? Leave us a comment on our Facebook page @EntertainmentDailyFix and let us know what you think!