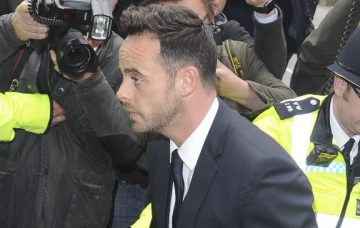 Ant McPartlin given £86,000 fine after pleading guilty to drink-driving

Ant McPartlin has been banned from driving for 20 months and given an £86,000 fine after pleading guilty to drink-driving.

The television presenter has requested to complete a drink-driving awareness course, which would reduce his driving ban to 15 months.

He must also pay £85 prosecution fees and a £170 surcharge, according to Sky News.

The judge reportedly took into account Ant’s weekly earnings of £130,000 when making her decision.

The 42-year-old said he was “ashamed and mortified” by his actions after entering a guilty plea at Wimbledon Magistrates’ Court on Monday.

He was twice the legal limit when he was arrested on March 18 following a collision with two other cars in Richmond, London.

The court was told Ant had 75 microgrammes of alcohol in 100 millilitres of breath, when the legal limit is 35mcg per 100 ml.

Ant arrived to a scrum of photographers and reporters outside Wimbledon Magistrates’ Court, which was guarded by seven police officers.

He spoke to confirm his name, date of birth, address and nationality before pleading guilty to a single charge of drink-driving.

A statement read out by Ant’s lawyer said the Saturday Night Takeaway presenter was “ashamed and mortified” by his actions, and “accepts full responsibility” for what happened.

According to BBC News, the star’s statement to the court acknowledged he had let himself and many others down.

The statement reportedly also said the incident had been a “turning point” for Ant, and he appreciates people in the public eye must set an example to others.

A witness statement was also read out in court, in which the driver of one of the other cars involved in the collision said he feared his family could have died.

Ant’s lawyer told the court the television presenter is deeply sorry for what happened and is taking steps to ensure it never happens again.

Ant had been scheduled to appear in court on April 4, but the hearing was adjourned until today.