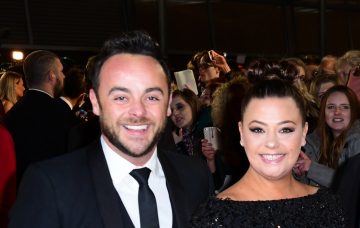 We would go to war over this cute dog, too

Just when you think the drama between Ant McPartlin and his ex Lisa Armstrong is resolved, something else pops up to cause trouble.

And this week’s issue is apparently their 10-year-old dog, Hurley.

An insider at The Daily Star says the former couple – who split at the beginning of this year and were granted a divorce in October – are now trying to sort out a custody arrangement for the pup.

A source said: “It’s a very sensitive situation because they always thought they would raise him together, but they are currently sharing custody and there will be a formal agreement made in the coming weeks.”

The Saturday Night Takeaway star – who has moved on with his former PA Anne-Marie Corbett – and his make-up artist ex have apparently had a week each with Hurley since they split in January, but now they’re hoping to come to a more long-term solution.

Award-winning Lisa, who calls Hurley “my boy”, recently celebrated International Dog Day with a tribute to the dog, captioning a picture: “Hurls! #internationaldogday 🐶🐶🐶.”

She also shared a hilarious action shot of the rescue on Twitter, as he jumped to catch a treat.

Her 142k followers loved it, replying with cute pictures of their own pups.

One called Hurley: “Very handsome 😬.” While another commented: “Love it when dogs pull faces like that…❤️.”

A third addressed Lisa directly, saying: “To me, it has always been apparent that you are a very loving and brilliant owner. He is lucky to have you ❤️🐾.”

Read more: Lisa Armstrong sparks concern as pal can’t get hold of her

Lisa, who has worked on Strictly Come Dancing for years, was spotted filming in the street on Monday, alongside fellow makeup artist, Alexia Jade.

It followed a few days of silence that worried her good friend and former Deuce bandmate, Craig Young.

The TV star had been quiet on social media after retweeting a fan’s old photo of her from the nineties.

She tagged her friend Craig, and wrote: “Ah look at us @craigryoung.”

But Lisa was back online this weekend, after an appearance on Strictly spin-off It Take Two, to respond to a fan asking where her dress was from, and to thank another follower who told her: “@lisaAmakeup Loved your vintage look tutorial on #ItTakesTwo.”

Who do you think should get Hurley? Leave us a comment on our Facebook page @EntertainmentDailyFix and let us know what you think.