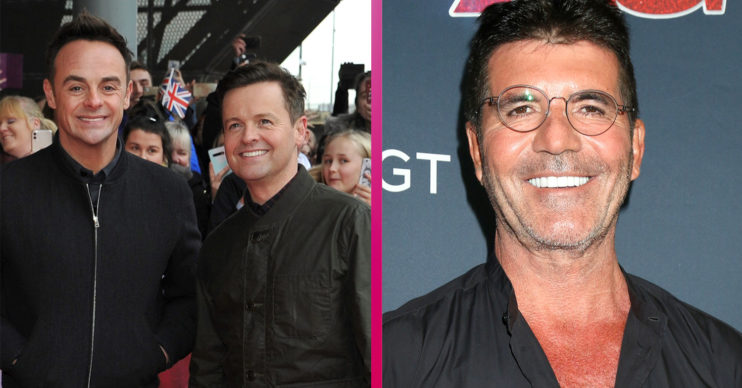 Simon injured himself in an electric bike incident

Ant McPartlin and Dec Donnelly paid tribute to Simon Cowell as he takes a break from TV after breaking his back.

Music mogul Simon, 60, broke his back in three places last month after a smash on his e-bike.

He has pulled out of the Britain’s Got Talent semi-finals and final to rest up at his Los Angeles home.

Geordie duo Ant and Dec had a framed picture of Simon backstage at BGT.

Ahead of last night’s second semi-final, the pair shared a snap of themselves to Instagram.

In the photo, Dec is seen gazing at the photo of Simon while Ant points his finger at it and pulls a face.

The pair wrote: “Missing you @simoncowell, but we always have you near in our backstage den.”

One person commented: “Dec seems to be missing Simon. I’m not sure about Ant.”

Another wrote: “So funny, I love you two,” while a third added: “I’m sure he’ll be very touched. Can’t wait to have you back on my screen tonight!”

Meanwhile, following his accident, Simon underwent a six-hour surgery which saw a steel rod inserted into his back.

It is believed he is recovering at home in Malibu with partner Lauren Silverman and son Eric.

Missing you Simon, but we always have you near in our backstage den.

Last month, he told fans on Twitter: “Some good advice… If you buy an electric trail bike, read the manual before you ride it for the first time.”

In addition, he has also reportedly been nicknamed The Terminator as he rests up.

A source told The Sun: “One of his friends joked that the metal holding him together makes him The Terminator – which amused Simon.

“He won’t mind if that sticks, but the main thing is that he’s on the mend.”