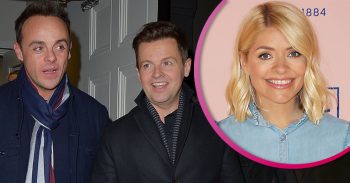 She bagged TV Personality of the Year

Holly Willoughby has beaten Ant McPartlin and Dec Donnelly to bag TV Personality of the Year at the TRIC Awards.

Geordie duo Ant and Dec missed out on the gong to Holly, 38, alongside Celebrity Juice host Keith Lemon.

The pair won the award last year but thanks to her busy year on telly, Holly has received the accolade.

Holly co-hosted last year’s I’m A Celebrity… Get Me Out Of Here! alongside Dec for three weeks as Ant took most of the year off to focus on his recovery following his drink-drive arrest and stint in rehab.

She’s also just finished a series of Dancing On Ice as well as her regular work on This Morning and Celebrity Juice.

Holly was unable to attend the TRIC Awards on Tuesday afternoon as she was attending her grandmother’s funeral.

But she did record a video message for the event.

This Morning’s editor Martin Frizell told The Sun: “Holly deserves this award more than ever this year after all her recent success.

“She is a joy to work with and all at This Morning are very proud of her.”

Ant and Dec recently failed to secure a nomination at the Royal Television Society Awards for the first time in nine years.

The beloved Geordie duo have been missed off the list at the upcoming ceremony, which honours the “extraordinary talent evident across the UK’s television”.

The pair did bag the Best Presenter award at the National Television Awards in January, though.

Ant and Dec will return to TV next month for the new series of Britain’s Got Talent.