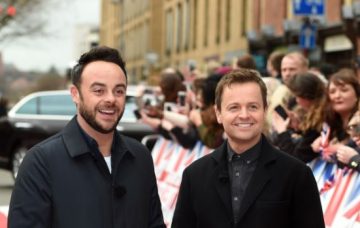 Fingers crossed for a reunion soon

It’s been a long, cold six months without the smiley combination of Ant McPartlin and Declan Donnelly on our TV screens – but they hopefully starting to think about their return.

The veteran presenting duo have been spotted having a so-called “crisis summit” at their management offices in London, to discuss their on-screen return early next year.

The Sun reports that the pair looked “sombre” after their meeting, where an insider said they talked through Ant’s comeback.

A source said: “Ant’s well-being is at the forefront of everyone’s minds and he’s in a great place. They are trying to work out how his comeback will pan out and how everything will work.”

The pair – who were last seen together on TV in May – were joined by their partners.

Dec’s wife Ali Astall was there with their new baby daughter, Isla, while Ant was joined by his girlfriend and former PA, Anne-Marie Corbett.

Ant has been on an indefinite break from work since May, following his latest rehab visit and a drink-driving arrest.

He apologised to the public after being fined £86,000 and getting banned from driving for 20 months.

His reps released a statement confirming his “break from all television presenting roles until 2019”.

It continued: “Ant will not present I’m A Celebrity…Get Me Out Of Here! in November this year.

“In addition Ant and Dec have made the joint decision not to present a new series of Ant & Dec’s Saturday Night Takeaway in Spring 2019.”

And while he recovers fully, Holly Willoughby is covering Ant’s spot next to Dec on I’m A Celeb.

But Ant’s getting better and his friend, publicity agent Simon Hargreaves recently confirmed the TV star was six months sober.

He wrote: “Long overdue catch up with my buddy of 20+ years for lunch this week. 6 months sober, annoyingly healthy looking, and happier than I’ve seen him in years. Immensely proud of this lad for his strength and determination to face up to his issues and get help.”

We’re delighted to see Ant is on the mend. It’s been too long since we had our fave duo on screen together.