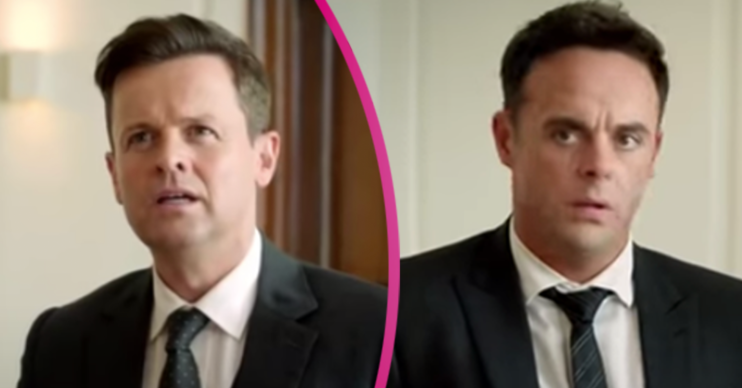 Ant and Dec have received well wishes from their fans for the summer in their latest tweet.

And they have wished their huge fan base a great month of August as they sign off social media for a bit.

Anthony McPartlin, 44, and Declan Donnelly, 44, say they are going social media silent for the entire month.

Addressing their Twitter followers, they shared: “We’re both taking a break for a few weeks to spend time with family and friends.

“Wishing everyone a great month and we’ll see you at the end of August!”

Their announcement appears to have left their followers somewhat divided.

A fair few praised their decision, whereas others argued that they’d already enjoyed a decent break during lockdown.

One fan replied: “And why not. You deserve it. Thanks for all the entertainment. You’re both hilarious but we all knew that anyway. Have a nice break. See you in 4 weeks. Happy Anniversary as well, Dec xx.”

And another agreed with: “Have a great time, thank you for all the content throughout lockdown and the past few months it’s really kept us going. See you soon.”

The pair had to cancel their scheduled filming for Saturday Night Takeaway due to lockdown restrictions.

While they haven’t been able to present on telly, they’ve taken to TikTok and shared several hilarious prank videos.

However, several other fans argued that the dynamic duo have been enjoying one long holiday during these unprecedented times.

One user tweeted: “Taking a break for a few weeks… I thought that’s what you have been doing since I’ve not seen you since you were presenting from your living room.”

A second user argued: “A break from what? I love you guys but you’re not exactly prolific on social media & haven’t been on my telly box for months.”

We’re both taking a break for a few weeks to spend time with family and friends. Wishing everyone a great month and we’ll see you at the end of August! 🙏🏻 pic.twitter.com/4xLdtTPvE1

And a third lamented: “A break from what exactly. Love them but what have they been doing for months.”

Other users queried over whether this year’s I’m A Celebrity… Get Me Out of Here! will film in Scotland.

Rumours hit the press last month that the show may be forced to film here due to travel restrictions.

One user asked: “Is Celeb Get Me Out of Here from Scotland this year boys??”

Another begged: “PLEASE DON’T DO I’M A CELEBRITY IN SCOTLAND it really isn’t the weather for it here they’ll all end up with pneumonia it’ll be far too cold, best to just leave the series for a year bring it back next year.”

Do you think Ant and Dec deserve some time off? Share your thoughts with us on our Facebook page @EntertainmentDailyFix.