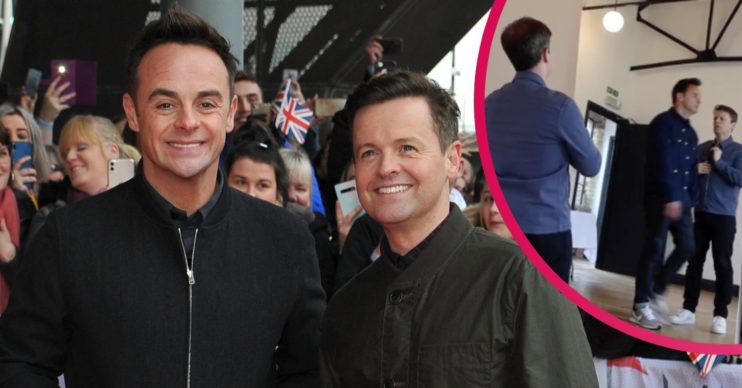 Their followers just can't work it out

Ant and Dec have left fans scratching their heads after sharing a clever new video involving a mirror.

The Geordie duo shared the clip on Instagram and it has really left their followers baffled.

In the footage, Dec can be seen styling his hair in a giant full-length mirror in a studio.

Then, as he fluffs his barnet and tweaks his shirt collar, Ant walks into shot and past the mirror.

But although Ant walks in front of Dec in the reflection, he does not appear in the studio at all.

Dec can then be seen looking back at the camera with a puzzled face.

The lads shared the video with their 4.3 million followers with the caption: “It’s a mirrorcle!”

Thousands have commented, with most admitting they are utterly confused by the stunt.

How are you guys doing thissss.

One wrote: “You have to explain to us how you did this guys, come on.”

Another pleaded: “How are you guys doing thissss?!”

A third posted a ‘mind blown’ emoji, writing: “Wait? How?”

One follower claims to have spotted a glitch in Ant’s stride as he walks in front of Dec’s reflection, but this does not explain how the trick was done.

What are Ant and Dec up to at the moment?

Ant and Dec are currently off telly screens after Ant and Dec’s Saturday Night Takeaway wrapped in April.

Earlier this month, Ant and Dec launched a new Prince’s Trust Initiative, which aims to get young people into media jobs.

However, the presenters were forced to apologise after an appearance on The One Show.

They had appeared on the BBC One programme to promote the initiative when Ant made an apparent gaffe.

When asked what they would liked to have done for jobs if they hadn’t made it as presenters, Ant said: “I always fancied being a cameraman.”

A short while later, The One Show’s Alex Jones said: “We have to point out we have Hayley here, a camerawoman.”

Read more: Panorama: Piers Morgan says the BBC ‘has blood on its hands’ over Diana interview

Dec, however, had his pal’s back and told Ant: “But you’d be a cameraman.”

Viewers also sided with Ant, with one tweeting: “God forbid we forget the ‘camerawoman’, who probably couldn’t care less about being offended. Yep. Dec would love to be a camera woman too.”

Can you work out Ant and Dec’s trick? Leave us a comment on our Facebook page @EntertainmentDailyFix and let us know!