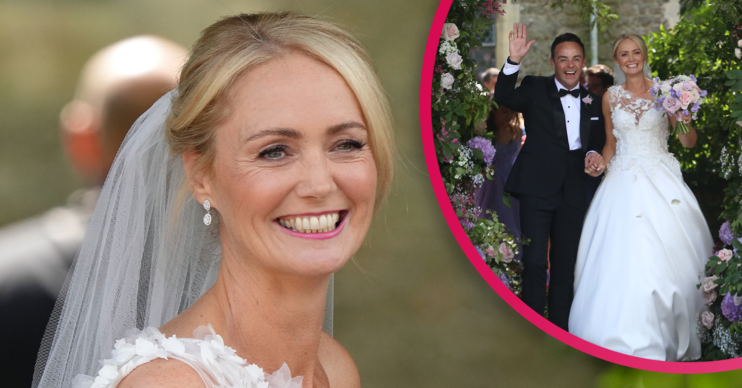 Ant and Anne-Marie latest: Bride’s touching tribute to her late father on her wedding day

He was with her in spirit on the day

The latest news from the Ant McPartlin and Anne-Marie Corbett wedding suggests the bride paid a touching tribute to her late father on her wedding day.

And, while Ant remarked that he now had his “perfect family”, one man was sadly missing from Anne-Marie’s big day.

Although the bride made sure that he was there in spirit.

Ant and Anne-Marie latest: How did bride pay tribute to her dad?

Anne-Marie’s father passed away previously and was sadly not there to walk his daughter down the aisle.

However, her beloved dad Paddy was there in spirit thanks to a special tribute from Anne-Marie on the day.

Eagle-eyed onlookers spotted a trinket attached to the bride’s beautiful bouquet of flowers.

Read more: Phillip Schofield is all smiles at Ant’s wedding with estranged with Stephanie

It featured a small photograph of what appeared to be Anne-Marie draped around her dad’s shoulders.

The trinket appeared to have a message for “Dad”, following by a kiss, which was engraved next to it.

Anne-Marie carried the bouquet with her dad’s picture with her down the aisle as she went to marry Ant, and was seen posing with it outside the church afterwards.

Was Anne-Marie’s mum at the wedding?

Indeed she was and, not only that, Ant paid tribute to his new mother-in-law in his speech.

The TV star shared a heartfelt message with his new mother-in-law Anne, thanking her for allowing him to marry her daughter.

Read more: Phillip Schofield is all smiles at Ant’s wedding with estranged with Stephanie

Anne is then said to have returned Ant’s sweet sentiment by praising him for being such a great stepdad to her granddaughters.

Speaking about his new stepdaughters in his speech, Ant also revealed that the girls – Poppy and Daisy – call him “Dad”.

Ant is said to have told guests: “I’m grateful they call me Dad.”

Who is the girls’ dad?

They split in 2017, before Anne-Marie started dating Ant the following year.

Head to our Facebook page @EntertainmentDailyFixand tell us what you think of this story.