Fans of Emmerdale were left stunned after last night’s double bill killed off two members of the White family in an epic car crash stunt.

They watched in horror as unhinged teen Lachlan White, grabbed the steering wheel while his mum, Chrissie, was driving and DELIBERATELY drove them into the path of an oncoming lorry.

Robert Sugden – who they were chasing after he snatched baby Seb – called an ambulance and Rebecca and Lachlan were taken to hospital.

But one thing that wasn’t explained was what happened to the poor lorry driver? Did they live/die/do a runner from the scene?

Fans took to Twitter to express their concern for the faceless figure.

One viewer wrote: “Can someone please check on the lorry driver. Just because he’s an extra and not main cast shouldn’t mean he’s left to die unacknowledged #emmerdale”

Another said: “Well I hope the lorry driver is okay Cos emmerdale Have suddenly forgot about him/her.”

While a third wondered: “Was no one concerned about the lorry driver?”

Fear not though as both Duncan Foster – who directed the car crash – and Emmerdale have tweeted updates on the driver.

“Thank you so much for all your kind comments on tonight’s @emmerdale episodes,” wrote Duncan. “For the record. The lorry driver was a she. She survived but didn’t make the final cut as we ran out of time. #thatsshowbiz”

Emmerdale added: “THIS JUST IN FROM HOTTEN GENERAL HOSPITAL: “The lorry driver is OK. She’s sustained minor cuts from the cutting room floor but she’ll live.” 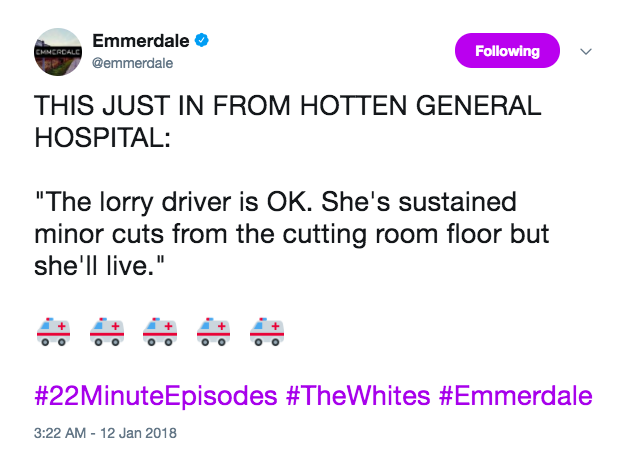 So there you go, the lorry lady is just fine.

We wouldn’t want to be in her position right now.