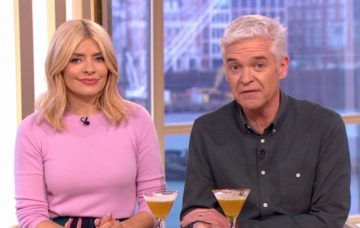 Well, we could have guessed!

Holly Willoughby gave Phillip Schofield a ticking off on Thursday’s This Morning after he revealed she was hungover!

The pair had been partying at the BRIT Awards the night before but managed to still look fresh-faced when they arrived for filming.

And we’d all have been none the wiser about their secret headaches if Phil hadn’t piped up!

During a cooking segment where Dr Rupy was showing them how to make a healthy one-pot Mediterranean cod dish, Phil turned to Holly and said, “If I’m honest, what you’d really love now is mac and cheese!”

She then tapped him on the arm with a kitchen utensil, chiding: “Nothing is ever a secret with you!”

After Dr Rupy dished up his meal, he mentioned how the ingredients would help cure Holly’s hangover.

She immediately responded by asking his advice on the best breakfast on a hangover.

Giving some insight into Holly and Phil’s morning, we then found out Holly had munched on scrambled eggs, waffles and fried bread before coming on air!

Adopting a faux angry stance as Phil disappeared off camera laughing, Holly said: “Keep going, why don’t you tell them everything!”

Even with their hangovers, however, nothing was going to stop the booze-loving pair trying a £50,000 COCKTAIL later in the show.

The reason for the massive price tag is a £40,000 diamond floating on top!

It also contains two exclusive tequilas at £2,000 a bottle.

Holly joked the margarita fumes were taking her back to the BRITs but, after taking a sip, said: “Oh, that’s a good margarita. I think that’s going to make me feel a bit better!

Clearly quite fancying another sip, Holly then joked: “Can we go to a break or something we can throw too?!”

What’s your best hangover cure? Leave us a comment on our Facebook page @EntertainmentDailyFix and let us know!