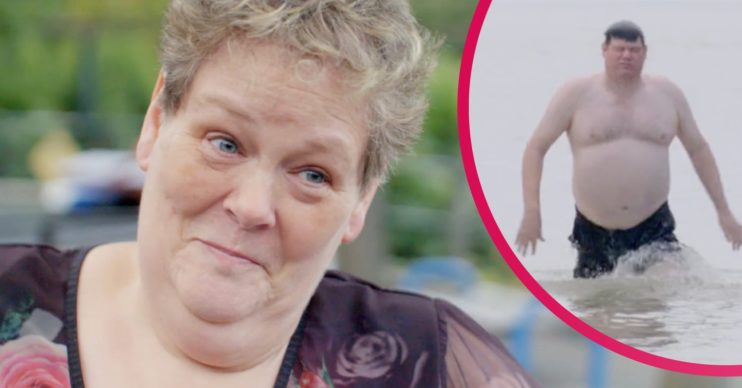 The Chase star Anne Hegerty has denied perving at her fellow quizzer Mark Labbett during their Road Trip series.

The Governess, 62, is on screens at the moment with The Beast, 55, and their ITV quiz show co-star Shaun Wallace, 60, for The Chasers Road Trip: Trains, Brains and Automobiles.

The programme, which concludes tomorrow (Thursday, February 3) sees the trio travelling around the world to test their intellect against some unlikely opponents, including animals, children and robots.

What happened with The Chase stars Anne and Mark?

During the first episode of the series, one scene showed Anne watching Mark as he stepped out of the water, Bond-style, with only his swimming shorts on.

Anne appeared to be ogling her fellow chaser as he strode onto the beach with his torso exposed. A text asked her if she was enjoying the view and Anne seemed to take a look at Mark before saying: “Yeah…”

However, the brainbox has now clarified that she wasn’t perving at him.

And she isn’t into younger men.

She claimed it was edited to look that way, as she told The Sun: “Let’s not go there. I always say we’re not each other’s type and I don’t do younger men. I just looked over my shoulder at the sea and they cut in an image of Mark coming out.

“Mark was not actually doing that at that time. Editors are wicked. Producers just like to do that sort of thing.”

Anne added: “I laughed and then I rolled my eyes and thought, ‘For God sake, now everyone’s going to think I have a crush on Mark’.”

What is The Chasers Road Trip about?

In the first episode of The Chase spin-off series, the trio were in the US, where they pitted their brains against animals including orangutans, bonobos and dolphins.

It raised important issues surrounding how these creatures are protected, including how the habitats of orangutans and other primates are destroyed by the palm oil industry.

For God sake, now everyone’s going to think I have a crush on Mark.

In episode two, Anne, Mark and Shaun were in the UK, this time testing themselves against child geniuses.

Anne played, and lost, a game of scrabble with a young boy, while Mark tried and failed to defeat another at chess.

Shaun, meanwhile, did a quiz against a young girl and got well and truly destroyed.

In episode three, the chasers are in Japan to learn about robots and investigate advances in artificial intelligence.

Have you enjoyed seeing Anne and her The Chase co-stars in their Road Trip show? Leave us a comment on our Facebook page @EntertainmentDailyFix and let us know.