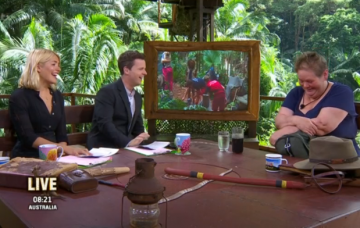 She's glad to be out!

Anne Hegerty has been voted off I’m A Celebrity… Get Me Out Of Here!.

The 60-year-old television quiz personality – best known as The Governess on ITV quiz show ‘The Chase’ – has become the fifth celebrity to leave the jungle on the ITV reality show, after she failed to win enough votes from the public to keep her in the competition.

Anne follows in the footsteps of TV legend Noel Edmonds, ‘Hollyoaks’ star Malique Thompson-Dwyer, ‘Coronation Street’ actress Sair Khan, and actress Rita Simons, who have all been kicked out of camp since voting opened last week.

The star wasn’t too disheartened to be leaving the jungle though, as after having struggled with camp life recently, she looked thrilled to be able to get out as she quickly gathered her things and said goodbye to her fellow camp mates.

Before her departure from the show, Anne was able to enjoy a trip to the famous Jungle Arms pub – in which the camp mates are treated to comfort foods including chips with tomato ketchup – with the remaining six contestants.

Whilst there, the quiz mastermind surprised everyone with a tale about her on-stage antics with Peter Andre.

When singer Fleur East asked: “So Anne, do you think I can get you to twerk tonight?”

Anne replied: “As I say, I’ve have already … I have twerked on stage at the London Palladium with Peter Andre.”

The brainy star’s departure means that just six celebrities – Harry Redknapp, Nick Knowles, Fleur East, Emily Atack, James McVey, and John Barrowman – are left battling it out for the chance to be named King or Queen of the Jungle during Sunday’s final.

There was so much love for her on Twitter…

anne did herself proud and brought awareness to aspergers and showed that people with autism can do anything and be anyone. amazing lady #imaceleb

Ah Anne! I love her! Glad she’s out for her sake though #ImACeleb

Hearing @anne_hegerty describe herself as the “Anti-Nick” has just summed up her time in the jungle! She’s funny, witty, intelligent, caring and just and all round brilliant person! Well done for lasting so long! #ImACeleb #welldoneanne #antinick

So pleased Anne got finish it, she didn’t quit or give up. She really did do herself proud!! #ImACeleb

So proud of @anne_hegerty ‘s journey she did amazingly well in #ImACeleb , especially happy with the outbreak it’s given to autism and showed people the truth of what it can be like to be autistic and done herself proud! ❤️

Was it time for Anne to go? Leave us a comment on our Facebook page @EntertainmentDailyFix and let us know what you think!