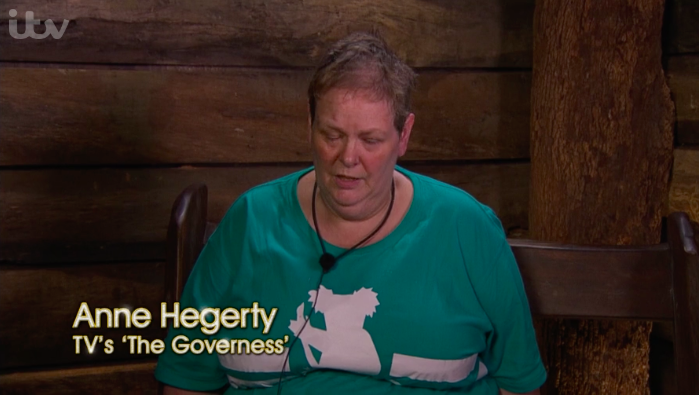 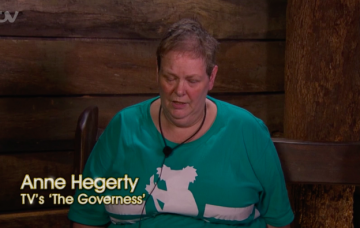 She admitted she had other filming commitments off-camp

Viewers were left perplexed during Thursday’s episode of I’m A Celebrity… Get Me Out of Here! when contestant Anne Hegerty admitted she was leaving the camp for some filming on Extra Camp.

It ruined the ITV2 spin-off show’s surprise announcement as they were set to unveil The Chase star’s appearance at the end of the episode.

Following presenters Holly Willoughby and Declan Donnelly’s announcement of the next challenge, the 60-year-old told her campmates they had some time.

She explained: “I’ve been told there is going to be some time because there want me to do something for ITV2 first.

“So it’s not going to be immediate.”

Fans of the show were amused by the spoiler, with one tweeting: “I love how Anne says she’s got something to do for ITV2, thus ruining #ExtraCamp’s teaser link at the end of @ImACelebrity. Be more Anne. #ImACeleb #ImACelebrity.”

A second added: “Did I just hear this right? Anne saying she’s going to do something for itv2 before their trial?? That’s just burst my #imaceleb bubble! 😳.”

A third commented: “Anne straight in with ‘I’ve got to do something or itv2, so it won’t be soon’…. great info for the camp..👏👏👏👏#imaceleb.”

Others defended Anne’s comments, tweeting: “Are people seriously moaning about Anne telling her campmates she has an ITV2 commitment first so their challenge won’t be immediate, get a grip seriously #imaceleb.”

Read more: Anne Hegerty vows to stay in jungle until she’s voted out

Anne’s honesty has won her hoards of fans on the show, and she’s admitted to finally having “fun” in the jungle.

After an intense episode, where Anne – who has Asperger’s Syndrome – smashed the Hellish Hospital trial, she told her new friends how much things had turned around, saying: “I started out being absolutely feeble and pathetic.

“I’ve been thinking the last few days, yeah, you know what? This is fun. This is starting to be fun.”

Fleur East talked about the transformation in her pal, saying: “Anne has changed so much as a person in the time she’s been here. She’s become a lot braver.”

Let’s keep the magic going, please guys. Next time, you can just edit that stuff out, eh?

What do you think of Anne lifting the lid on life behind the scenes? Leave us a comment on our Facebook page @EntertainmentDailyFix and let us know what you think.