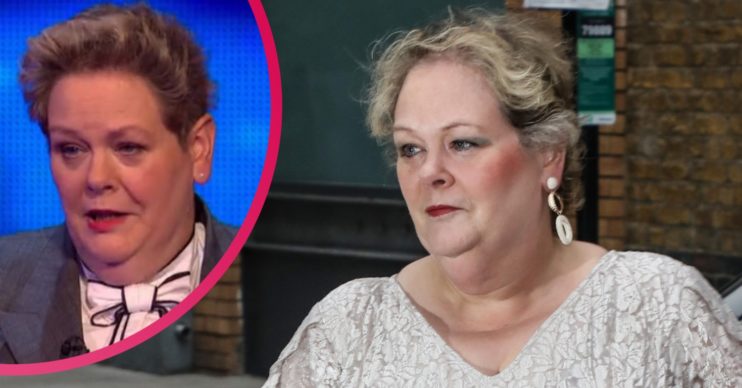 She's been on a sabbatical during the lockdown

Quizzer Anne Hegerty has spoken about resuming filming on new episodes of The Chase amid viewer complaints about having to watch months of repeats.

ITV has been airing repeated episodes of the popular quiz show during the lockdown, as it brought filming to a halt.

Anne recently revealed she is on a sabbatical until work on new instalments of The Chase resumes.

What did Anne Hegerty say about filming of The Chase?

Speaking to a fan of the programme on Tuesday (July 14), Anne revealed her hope that filming will get underway again “in the next few months”.

However, she conceded that at this stage in the UK’s coronavirus lockdown, it’s still “hard to tell” exactly when she’ll be back in the studio with host Bradley Walsh.

Someone asked Anne on Twitter: “Hi Anne, huge fan of the #TheChase. Do you have any idea when you’re able to get back to filming, as we [have] had months of series 10 repeats?”

The Governess replied: “We hope in the next few months, but it’s hard to tell. Depends on how this virus all pans out.”

We hope in the next few months, but it's hard to tell. Depends on how this virus all pans out.

It follows complaints from viewers who are craving new episodes of The Chase and other ITV quiz shows, including Tipping Point.

One asked on Twitter: “Does anyone know when we’re due new episodes of #TippingPoint and #TheChase?”

Another joked: “#TheChase ‘We won’t show new episodes for another three months, so have some terrible old repeats instead!'”

Someone else demanded: “Why is #TheChase and #TippingPoint still stuck on repeats even though new #Pointless is on?”

#TheChase 'We won't show new episodes for another three months, so have some terrible old repeats instead!'

Why is #TheChase & #TippingPoint still stuck on repeats even though new #Pointless is on?

While fans haven’t had the pleasure of seeing Anne on new episodes of The Chase, she did recently host an all new series of Britain’s Brightest Celebrity Family.

Earlier this month, she had to hit out at one viewer on social media who suggested the programme – won in the end by former EastEnders star Shaun Williamson – was rigged.