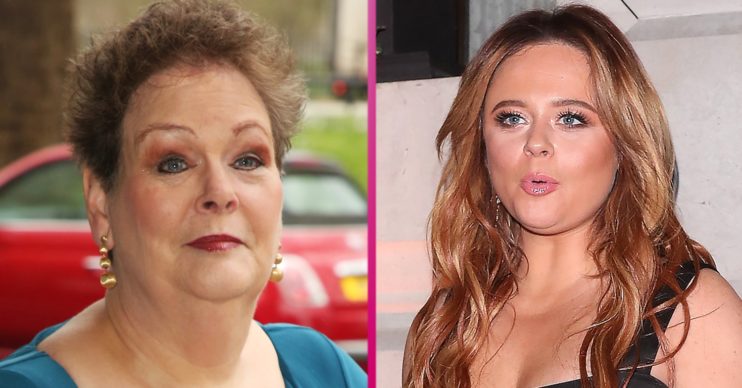 The chaser advised them to "grow up"

The Chase favourite Anne Hegerty had to hit back at a social media user who criticised her pal Emily Atack‘s sweet birthday tribute.

Anne, best known as The Governess on the hit ITV quiz show, turned 62 on Tuesday (July 14).

On Twitter, she received a sweet message from her former I’m A Celebrity… Get Me Out Of Here! campmate Emily, who was in the jungle with her in 2018.

What did Emily Atack say to Anne Hegerty?

Actress and comedian Emily tweeted to Anne, “Happy birthday to this wonderful woman” alongside three red hearts and a clinking Champagne flutes emoji.

Her tweet included a picture of her with her arm around Anne at an event.

In the replies, Twitter users flocked to wish Anne a happy birthday. One told her to have a “super day” and another wrote, “I hope coffee and cake are involved”.

Read more: Emily Atack looks sensational as she shows off the results of her lockdown hair and body transformation

However, one commented: “Shocker, you put a picture of yourself to wish your ‘friend’ Happy Birthday. Grow up.”

Anne, seeing the user’s response, clapped back: “Because Em and I are friends! You grow up!”

Because Em and I are friends! You grow up!

The user’s reply suggested it could have been down to a misunderstanding, since the picture was of both Anne and Emily. They said: “Anne, I never said you weren’t friends. I just thought it was weird that’s a picture of her wishing you happy birthday. Each to their own.”

Anne has been on a sabbatical in recent months, after ITV paused filming on The Chase during the UK’s coronavirus lockdown.

Earlier today, one fan of the show asked Anne on Twitter when she thinks ITV will be making new episodes of the popular quiz show. For almost the entire lockdown, the broadcaster has aired repeats.

Anne revealed her hope that filming will be able to resume in the “next few months”.

However, she conceded that at this stage in the UK’s coronavirus lockdown, it’s still “hard to tell” exactly when she’ll be back in the studio with host Bradley Walsh.

Someone asked Anne on Twitter: “Hi Anne, huge fan of the #TheChase. Do you have any idea when you’re able to get back to filming, as we [have] had months of series 10 repeats?”

The Governess replied: “We hope in the next few months, but it’s hard to tell. Depends on how this virus all pans out.”