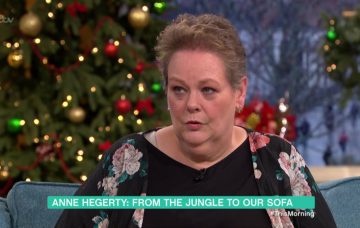 She read her lines on the down low

I’m A Celebrity stars may not be allowed secret luxuries on the show, but Anne Hegerty has revealed she was given her panto script to learn off-camera.

The Chase star – who will play the Queen Rat in Dick Whittington – let the secret out during an interview on This Morning on Thursday.

The 60-year-old confessed to Phillip Schofield and Rochelle Humes: “I was given half an hour to rehearse in the medical tent.”

She may be a quiz pro, but with Anne’s panto role starting on December 18 she hardly has time to learn all her lines since leaving the jungle!

Her performances will run until January 6 at the Theatre Royal, Windsor.

Numerous celebs declare how they would love to do I’m A Celebrity every year but Anne also revealed she had to be convinced to take part by show bosses.

Explaining that her The Chase co-star Mark Labbett helped her make the decision, she said: “I discussed it with Mark. Initially I said there wasn’t enough money in the world and then my agent said [bosses] wanted to take you for lunch, because they look after a few other things and they were absolutely delightful.

“It took nearly another month before everything is sorted out. Mark was in touch saying you really should do it.”

After finding her first days in the jungle tough, an emotional Anne nearly walked out. But, luckily, her campmates rallied round and convinced her to stay.

Fans have also praised her for how well she looks since leaving the camp.

The star, who also opened up about her Asperger’s during the show, lost over a stone during her three-week stay.

During an appearance on This Morning last week, Anne revealed she had to stop eating rice on its own because it wasn’t agreeing with her.

She said: “About a week ago my digestive system just said to me, ‘I’m sorry, I’m not having any more rice. I can have beans, I can have rice and beans but I am having no more rice because it is just going straight through.’

What do you think of Anne getting her panto script in camp? Leave us a comment on our Facebook page @EntertainmentDailyFix and let us know what you think.