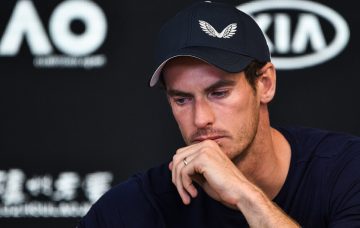 Sir Andy Murray breaks down in tears as he announces retirement

He had to leave the room

In an emotional press conference, the great Sir Andy Murray has announced his retirement from tennis.

Fans were heartbroken as they watched the champion tennis player break down in tears, even leaving the room at one point to compose himself.

The former men’s world number one couldn’t hold back his tears at the press conference in Melbourne, as he revealed this would be his last year of tennis.

Andy – who has been struggling to recover from surgery after a hip injury – said he would like Wimbledon in June to be his final tournament.

But he also admitted fears that next week’s Australian Open could end his career.

The 31-year-old said: “I’m not sure I’m able to play through the pain for another four or five months. I want to get to Wimbledon and stop but I’m not certain I can do that.”

Read more: Louise Redknapp breaks silence on ‘heartbreaking’ injuries, which forced her to pull out of West End show

The official account for Wimbledon tennis posted their own moving tribute to the player.

Whatever happens next, you've done more than you know.#Wimbledon pic.twitter.com/0eJFHVpALG

Addressing the player directly, they tweeted: “To Andy, Whatever happens next, you’ve done more than you know. #Wimbledon.”

Andy’s fans rushed to send their love to the sporting icon, with one commenting: “The greatest tennis player this little island has ever produced #ThankYouAndy

A third added: “Dear Mister Murray, I wish you can finish this year like you want it. You deserve it, that is sure. We stand all behind you.”

Others admitted being emotional themselves, saying: “This one has done me in 😭.” A second admitted: “I’m struggling at work to hold it together. He is a one off and what an absolute privilege to have seen him play. #OnlyOneAndy ❤❤.”

A third said: “I feel like I’m in mourning, but I hope to see him back in a different capacity making a difference to the world of tennis #alwaysno1.”

This is such sad news. We’ll miss you Andy, but thank you for representing Britain so brilliantly.

Are you sad to see Andy retire? Leave us a comment on our Facebook page @EntertainmentDailyFix and let us know what you think.